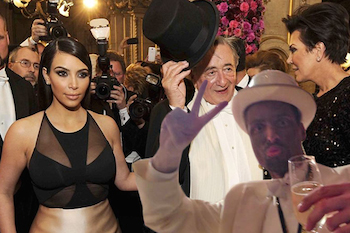 Earlier this year, TMZ reported that Kim Kardashian had a disastrous outing at the Vienna Opera Ball.

The rich reality TV star left with her mom Kris Jenner after a white man dressed in blackface pretended to be her then-boyfriend, Kanye West. Kardashian was originally paid $500K to be the guest of Richard Lugner, an Austrian businessman who has a long history of paying starlets half a million dollars to be his arm candy at the Vienna Annual Opera Ball.

While she was taking pictures with Lugner, a guy who was working the ball came up to her in blackface, and proceeded to act like he was Kanye. In the video, which you can see below, Kardashian tries to escape her racist assailant, but since she was paid to attend, she stayed for another half hour.

To make matters worse, the guy returned to Kim with a request for her to hit the dance floor. When she tried to brush him off, the guy responded by asking her if she’d dance if the orchestra played “N*****s in Vienna.” The footage of all this incident has finally came to light, as Kardashian was shooting at the time for her reality TV show, “Keeping Up With the Kardashians.”

Watch the clip for yourself and share your thoughts in the comments below: