[Video] DeRay Mckesson: Equity vs. Equality in Tech. Which is Fair? - Black Enterprise

Recently, the Tech Inclusion conference took place at The Armory in San Francisco. Topics ranged from “Creating an Inclusive San Francisco” to “Who’s Got Next in DIO (Emerging Diversity and Inclusion Officers).”

There was one conversation that absolutely stood out, coming from activist and host of “Pod Save the People,” podcast, DeRay Mckesson, interviewed by Change Catalyst co-founder Wayne Sutton.

WS: So we are at Tech Inclusion and Change Catalyst, sponsored by Google for Entrepreneurs, and a couple years the conversation was not at the intersection it is now with injustice and politics and race, and now it is and I feel like the tech industry has tried to avoid these conversations for years, basically a meritocracy.

Where is the conversation now, and what role do you think the tech industry should focus around creating an inclusive culture, or entrepreneurship for everyone, and focusing on diversity and inclusion, and how that aligns with social, civic, and racial justice?

So the end of racism and sexism, that is equity.

I’m a third-generation reader; my grandmother could sign her name, but could not comprehend text. So correcting for those historical wrongdoings, that is a matter of equity. Not like, every kid has a library card but, correcting that.

And diversity is about body and inclusion is about culture. So you see people doing relatively good bodywork. We hired 10 more women, yay, but it is a sexist workplace, that is not helpful. Or you have three more trans community members, but it is a trans-phobic workplace, and I see people make strides on the diversity part and fail on the inclusion part.

And we saw Michelle Serenberg a week ago, and thinking about the responsibility of these platforms to make inclusive communities, knowing that we struggled to make them offline. So we have not desegregated offline communities, they are hypersegregated. Can we do that in the online space? Is there something different that allows us more opportunity to put people in proximity to other people you wouldn’t be close to? How do we stamp out speech that leads to harm?

I think tech has an opportunity to do that. Every time I’m in San Francisco, I’m shocked, or I shouldn’t be anymore, but the rooms look the same. The people making decisions look similar. I wish I could put these people on the East Coast. Would the world outside look different? But I think tech can be a leader in bringing inclusivity into something that people can see, feel, and touch every day.

WS: What do you think needs to be the shift, or should there be one in our culture, to create wealth and should we look at tech as a way to create that wealth?

Look at tech education, and we know that it is changing everything that we do; it impacts our lives, from the time we wake to the time we go to sleep. What is our responsibility?

In this conversation one of the ways that whiteness performs its innocence, it’s like ‘OK, we get the past, let’s move on.’ How do you move on without some sort of redistribution, some sort of equity lens that makes it honest?

Mckesson believes that equality isn’t enough and we need equity. Watch the clip below: 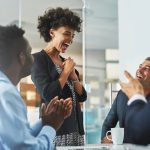 Your Coworkers Are Not Your Friends…But Maybe They Should Be 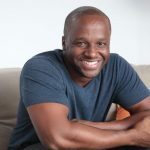