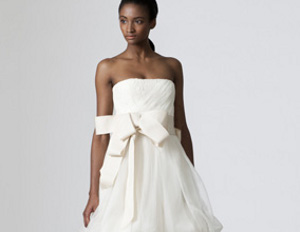 After global media revealed earlier this week that Vera Wang bridal boutiques were charging brides nearly $500 to try on wedding dresses, the fashion brand issued a statement promising to end this practice.

The try-on fee only applied at the company’s Shanghai store in China. According to company policy, brides were required to pay nearly $500 dollars for a 90 minute session where they were allowed to try-on bridal dresses. Photographs were not allowed to be taken during the session. The boutique says they instituted the policy in an attempt to deter counterfeiters, a problem that’s rampant in China.

A Vera Wang spokeswoman told Reuters that the 3,000 yuan ($480) charge was being scrapped as of Wednesday.

“Please kindly be informed that Vera Wang has abolished appointment fees at her bridal salons worldwide starting from March 27, 2013,” the spokeswoman said in an email.

The cost of a Vera Wang original wedding dress can range anywhere from $2,000 to over $10,000, but knockoff imitations can be found on popular counterfeit online shops for as little as $100.

In 2012, China was the top source for counterfeit goods entering the United States and Europe, according to the reports by custom agencies. The European Union says more than 70 percent of their counterfeit products they seize at their borders and via postal mail originated in China.

How to Prepare Your Business for Succession