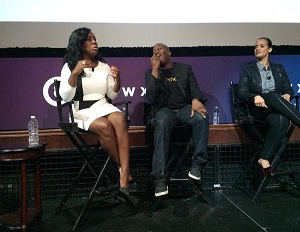 As more television viewers ditch their cable service in exchange for Netflix and other online-streaming services, it’s clear that the power of non-network shows is bigger than ever before.

Netflix hit series like Orange is the New Black, whose fourth season is set to premiere in 2016, and TheÂ Unbreakable Kimmy Schmidt, whose first season just streamed on Netflix in March, are without a doubt pushing the diversity envelope and proving to mainstream networks that viewers are yearning for more representations of reality.

“People are hungry for people who look like them and stories they can relate to,” said Tituss Burgess during a 2015 Advertising Week panel titled, A Diversity Revolution: How Non-Network Shows are Shattering Mainstream Norms.

Burgess, who plays the role of a gay rising actor inÂ Unbreakable Kimmy Schmidt, sat on the panel alongside Orange is the New Black stars Uzo Aduba and Dascha Polanco.

“I feared not being accepted because of the way I look. I couldn’t turn on the TV and say ‘Oh my gosh, I look like her,'” said Polanco while agreeing with Burgess that viewers are hungry for diverse images.

Opening up about his mom’s ongoing struggle to come to terms with his sexuality, Burgess admitted that some networks may have viewers like his mom who aren’t quite ready to face some of today’s realities.

“We don’t see characters like Titus on ABC or NBC and, the truth is, certain networks have an audience that would tank if you put an Orange is the New Black on their network,” said Burgess. “No, every network doesn’t need to have a show like Orange is the New Black, but it will be silly for them not to participate in the conversation.”

When asked if Orange is the New Black would still need a white female lead to gain attention if it premiered today, Aduba admitted that television still has a long way to go before she can answer that question with aÂ  ‘no.’

“I would answer with a very solid ‘I don’t know,’ leaning into ‘probably,'” said the Emmy-winning actress. “I think it would be perhaps foolish, I might say, or presumptuous, to believe or assume that in three plus years of television, all the progress that needed to be made had been conquered in that time through a singular show.”

Your Inner ‘Woman of Power’ is Calling; Answer Her Today