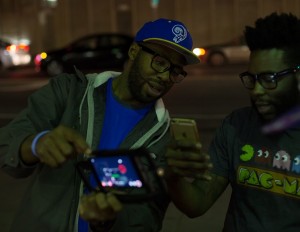 Recently, Black Enterprise chatted with independent filmmaker and technology advocate, Matthew Cherry, about shooting his latest feature on the iPhone 6S. In part one, Cherry breaks down his motivation to film on the iPhone 6s and how he did it. In part two of this interview, Cherry speaks on democratizing the filmmaking process with mobile and sharing resources with fellow artists.

BlackEnterprise.com: So in shooting on the iPhone, your goal was also to inspire?

Cherry: I thought if we shot this on an iPhone some young kid in Detroit or somewhere will see our movie, and think ‘Wow, I never thought I could shoot a movie on my phone.” I wanted to democratize the process and hopefully inspire young people to go out there and shoot their own movie. It doesn’t matter about the camera you shoot on; it’s all about the story. For less than $3K worth of accessories, lighting and cameras, we had all the equipment we needed to shoot this film. More than anything it was about inspiring other people of color to go out there and tell their stories.

You’ve had a filmmaking vlog and frequently share info on social. How do you use social media as a filmmaker?

I’ve been on Twitter for so long and have a decent following. I always wanted to use it to show love to fellow artists, be that actors or musicians. I knew when I joined Twitter that if you have a decent following with real people, you could really market some stuff. From the first day, I had that in mind. But then I matured and realized it’s bigger than me. If my fellow filmmakers are made aware of resources too, then it’s a more robust industry in general because we need as many people as possible supporting independent film. I may only put out one film a year but they’re 52 weeks in a year to support other people.

What’s your outlook on the future of mobile filmmaking?

I hope that more young people start to shoot. I hope filmmakers become younger; you have so many viners and YouTubers and Twitter comedians. So I think it’s very realistic that you will see an Oscar award-winning director that’s not even in college yet. The younger you are, the freer your ideas are. The world hasn’t told you no a thousand times. With mobile, I hope more filmmakers of color get out there and tell their story. It’s necessary. We need as many voices as possible.

You can find Matthew Cherry on Twitter at @matthewacherry.