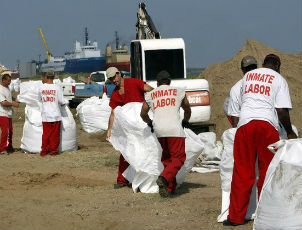 A government run agency named Unicor pays over 13,000 inmates across the U.S. wages as low 23 cents an hour.

The owner of a small apparel factory in Kentucky told CNN Money that his factory almost lost out on a contract to make windbreakers for the U.S. Air Force because of Unicor.

“That’s 100 people buying groceries. We use trucking companies in the town, buy parts and light bulbs there every day,” he said in an interview with the news outlet. “That’s all lost when prisons take away contracts.”