'Unfiltered' Documentary about Rihanna is in the Works 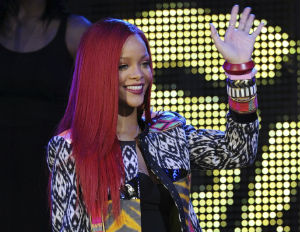 Rihanna fans rejoice–a documentary taking aÂ deeper look into the life of the pop culture icon is currently in the works. According toÂ Deadline,Â filmmaker Peter Berg, the principal of Film 44 and newly formed companyÂ Film 45,Â will produce the theatrical feature filmÂ about the musical juggernaut, philanthropist, and businesswoman.

Berg, who produced hit television shows and filmsÂ such asÂ Friday Night LightsÂ andÂ Lone Survivor, directed Rihanna in her first major film role in the 2012 filmÂ Battleship. He formed Film 45 to focus on non-scripted and branded entertainment for film, TV, and other platforms. Rihanna’s documentary is among the first projects the company is slated to produce. The film, described as “much more a character study than a music film,” is an “unfiltered look into Rihanna’s life and how she’s ascended to become a global icon.â€

This week, Rihanna’s latest hit single, ‘Work’Â tied with The Beatles for the second-most weeks spent at No. 1 on theÂ Billboard Hot 100. The single is also her 14th Hot 100 leader. JustÂ last year, she landed a $25 million deal with global tech giant Samsung to sponsor her Anti World Tour, and founded LA-basedÂ beauty and styling agency Fr8me.

She also lent her voice as Gratuity ‘Tip’ Tucci in the DreamWorks-animated filmÂ Home; a film which has grossedÂ $386,041,607Â worldwide. As the creative director at sportswear brand Puma, Rihanna showcased her Fall 2016 Fenty X Puma collection during New York Fashion Week this past February.

Apparently, there’s no stopping the leader of The Navy.