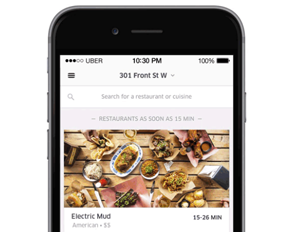 You thought your Uber car arrived quickly? Uber is attempting to take its speedy ride-sharing service in another direction: food delivery.

The company launched its new app, UberEATS, in the Apple and Google app stores. With the app users can order food from their favorite local restaurants.

Additionally, the app allows users to filter their menu choices by cuisine type. And “Instant Deliveryâ€ feature schedules food to be delivered in less than ten minutes.

“Matching you with the perfect meal is a complex endeavor. With the launch of the UberEATS app, we’re providing an experience completely tailored to food to help you get that perfect meal. In the same way, Uber makes it easy to get from A to B, UberEATS makes it easy to get food from the best restaurants in your city. Because an Uber driver-partner is never more than a few minutes away, as soon as the food’s ready it’s on its way,â€ stated Jason Droege, head of UberEVERYTHING, on UberEAT’s site.

The UberEATS service is currently only available in Chicago, Houston, Los Angeles, San Francisco, and Toronto. The next cities in which the service will launch are Atlanta, Austin, Dallas, Melbourne, Australia; New York City, Paris, Seattle, and Washington, D.C.

Uber has dominated the ride-sharing market, averaging what is estimated to be 30 million rides per month, according to the financial website, The Motley Fool.Â Its market coverage is also vast, with Uber operating in 300 cities in 60 countries.

The company has also been the subject of criticism. There have been several incidents of bizarre and sometimes criminal acts committed by Uber drivers. One Uber driver was arrested for kidnapping a woman in Los Angeles. Another was charged with assault and battery in two separate incidents with passengers.

And in 2014, CEO Travis Kalanick made sexist remarks in a GQ interview and blamed the media for highlighting bad behavior on the part of Uber drivers.

Still, even with the bad press, the company is wildly successful with its ride-sharing service. With its brand name behind it, UberEATS is likely to be just as successful a venture.

By The Numbers: Delegate Count