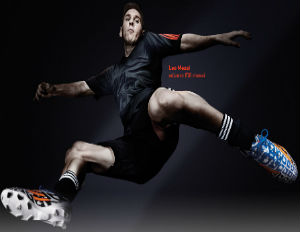 While four teams duke it out in Brazil to become the 2014 World Cup champions, a little known war has been going down in the south American country, this one potentially over hundreds of millions of dollars, market supremacy, and bragging rights.

Here are the players. Of the four teams that made it into the semi-finals, two of them, Argentina and Germany, wear Adidas apparel, while the other two, Brazil and the Netherlands rock Nike outfits.

Here are the stakes. With Germany matching up against Brazil and Argentina up againstÂ  the Netherlands, there could be an all-Adidas or all-Nike final on July 13, an incredible advertising platform for whichever brand gets to be showcased.

These two global brands will do battle over the soul of the soccer industry and a bigger share of the market.

According to NPR.org, Nike and Adidas already control about 70% of the market, whoever emerges the victor of the 2014 campaign will go the spoils.

Nike reportedly produces about $25 billion a year in sales. Adidas does about $19 billion. But as big as Nike has been globally, soccer is Adidas territory. And if Nike wants to conquer the market it will have to tackle Adidas. Hard.

Bloomberg calls Adidas, “The incumbent in the apparel war, the company that pioneered athletic sponsorships as we know them and an official FIFA sponsor since 1970.”Â  Bloomberg says Nike is the upstart, buying top teams and players instead of the World Cup itself, “Adidas backs athletes, Nike backs athletic celebrities.”

According to Forbes, Adidas has “manufactured every soccer ball used in the World Cup since 1970 and recently extended its partnership with FIFA to last through 2030 at at a reported $70 million for every four years to maintain the relationship.” Forbes also saysÂ  the company behind “brazuca,â€ Adidas made the official match ball of the 2014 World Cup, which was tested for two-and-a-half years by more than 600 of the world’s top players before being introduced to the public in December 2013.

Need a Family Loan? Here’s the Right Way to Get It