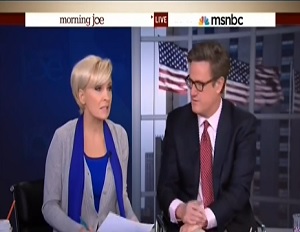 After members of the University of Oklahoma’s Sigma Alpha Epsilon (SAE) fraternity found themselves in hot water after being caught on video singing a racist chant, MSNBC’s “Morning Joe” Hosts Mike Brzezinski and Joe Scarborough placed themselves into the scandal by coming to the defense of the fraternity members.

Brzezinski referred to the music of Waka Flocka Flame, who cancelled his show at the university after seeing the video, as one of the reasons the students shouldn’t be faulted for singing the chant.

Scarbough echoed Brzezinski’s sentiments saying, “Anybody that watches Empire knows that 70% of the audience is white. So the kids that are buying hip hop or gangster rap, it’s a white audience, and they hear this over and over again. So do they hear this at home? Well, chances are good, no, they hear a lot of this from guys like this who are now acting shocked.”

Host Willi Geist interjected, explaining, “There is a distinction between white kids on a bus talking about hanging someone and Waka Flocka singing a song.”

Remarks from the show quickly went viral and within a matter of minutes, Black Twitter had already come up with the clap back hashtag #RapAlbumsThatCausedSlavery for those who continuously blame rap music for the racist behavior of others.

Click below to see some of the popular tweets that have been circulated.

Black Beauty: 6 Women Who Made History with Major Beauty Brands