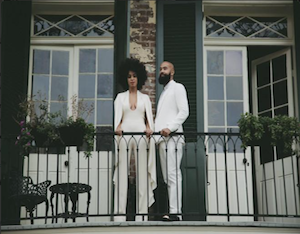 Congratulations are in order for newlyweds Solange Knowles and Alan Ferguson, as the duo tied the knot in front of close family and friends over the weekend in New Orleans.

The happy couple exchanged vows and said “I do” at the legendary Marigny Opera House outside of the French Quarter. According to paparazzi and press that were on-hand to take pictures, Knowles and Ferguson rode their bicycles before the wedding, during which several residents also congratulated them. The all-white affair was attended by BeyoncÃ©, her husband Jay Z and daughter Blue Ivy. Janelle Monae was noted as the only celebrity guest who arrived.

As the longtime lovers beamed from ear-to-ear, mother Tina Knowles was there to witness it all and was spotted holding hands with her boyfriend. For those who don’t know, Alan Ferguson is a music video director who has helmed projects for Katy Perry, sis-in-law BeyoncÃ©, and John Legend. Solange has been a daring and innovative performer over the past few years. To celebrate their love, the bride wore a devastatingly fierce cream pantsuit with a cape and plunging V-neck, while the groom matched in a white suit sans tie.

Knowles and Ferguson made waves as the twosome celebrated their impending nuptials with a pre-wedding bash at NOLA’s Indywood Cinema, which Hayley Sampson, the theater’s co-owner, told PEOPLE, ” was pretty adorable. Twitter, a bastion of telling the world what it thinks, was nothing but celebratory when word of Solange’s marriage went through. This marks the second marriage for the private star, but according to the social media juggernaut, it might as well be the Saint Heron CEO’s first time at the altar.

With that in mind, we take a look at the bevy of beautiful tweets from people commemorating Solange Knowles and Alan Ferguson’s wedding. Enjoy!

UPDATE: A new video featuring Solange and her son, Daniel Julez, dancing to “No Flex Zone” has just went live. You can see it immediately on the next page!

The Good, the Bad, the Ugly: Top Social Media Reactions to Aaliyah Biopic