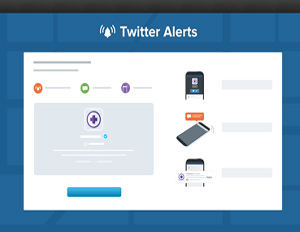 Twitter provides its users with up-to-the-minute coverage and breaking news as it unfolds, and, today, the popular microblogging site will now offer emergency alerts. Twitter Alerts, which launched in September for emergency accounts, government organizations and relief and charity groups, has been turned on in the UK and Ireland.

Thus far, some 57 Twitter accounts across the two countries have signed on, including the London Fire Brigade, London Ambulance Service and the Mayor of London’s Office. Twitter has a full list of the agencies now offering the alert service.

Here’s how it works, according to the announcement:

The newly public company allows users to subscribe via a special alert form on the participating agency’s Twitter account. However, if the user registers his/her phone number, the number is then findable by others on Twitter unless the user adjusts the account settings.

“Using social networking sites, including Twitter, gives us additional ways to talk directly to the public,â€ said Metropolitan Police Service Commander David Martin in a statement to Twitter. “Twitter Alerts means that our messages will stand out when it most matters.â€

#Soundoff: Would you opt-in to receive Twitter Alerts? Is this a service you’d like to see in the states? Let us know what you think in the comments section below.