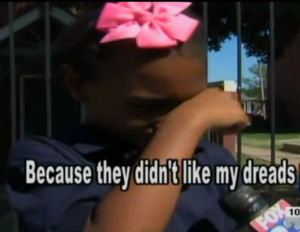 Tiana Parker’s parents decided to move her to a new school because her hairstyle, dreadlocks, did not follow the school’s policy. Her parents were called to an administrators office to discuss their child’s hair about a month before deciding to move her. The school’s policy stated that fad hairstyles could not be worn because it could be a distraction.

After some backlash from community leaders and media, the school board decided to amend the policy early this week, according to NewsOne. Instead of covering the way a child wears their hair the parents are now only responsible for their children’s personal hygiene.

The school board president apologized for any harm that was caused to Tiana and her family based on the policy.