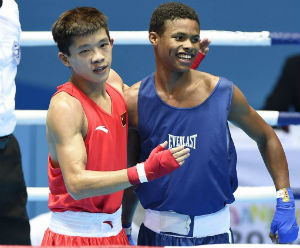 The following was written by J.R. Gamble, Senior Writer:

You know the expression, “You’ve seen the rest, now it’s time for the best.”

Well no offense to any of Team USA’s other medal winning fighters that have and will grace the Rio 2016 Olympics boxing ring in August, but when it comes to the future of American boxing, Newark, New Jersey, native Shakur Stevenson and his elite boxing skills, trash-talking style, and perfect 23-0 international record is the main attraction on a U.S. team that has already put two fighters in the quarterfinals and is conjuring memories of the 1984 boxing “Dream Team” that dominated those Los Angeles Olympics. We sat down with the gold medal hopeful before he headed to Rio.

Stevenson, who is only 19, is the first American male to win junior and youth world titles and a Youth Olympic Games gold medal. He is considered the most likely U.S. boxer to capture the squad’s first boxing gold medal since Andre Ward in Athens (2004).

When we first spoke to StevensonÂ in November of 2014, he was a 17-year-old prodigy and already talking Olympic gold. The realization of his dreams and confident predictions will begin on Sunday as Stevenson faces hometown Brazilian fighter De Jesus RobenilsonÂ on the road to riches and diamond rings.

Equipping People of Color for Jobs in Media

10 Bad Habits to Ban From the Workplace