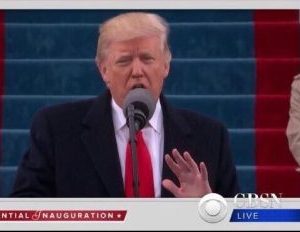 A deeply divided nation watched intently as Donald J. Trump was sworn in as the 45th president of the United States. Pledging to empower “America’s forgotten men and women,â€ a change of guard has taken place and an uncertain time has begun. With his hand placed upon two Bibles, one used by his family and another during President Abraham Lincoln’s inauguration, Chief Justice John Roberts swore Trump in.

As the crowd at the National Mall listened, Trump described a dark picture of the nation he has been entrusted to lead. With President Obama seated behind him, Trump expressed his disappointment and complaints about the closed factories, unemployed Americans, and exhausted U.S. leadership.

These words of nationalism–which helped to steamroll him into the presidential seat–were a repeated passage of his questionable campaign.Â He promised to awaken “new national pride,” bring jobs back to the United States, and “eradicate completely” Islamic terrorism.

Many longtime Washington leaders sat stoically as Trump tore into them at the U.S. Capitol. For too long, he said, “a small group in our nation’s capital has reaped the rewards of government while the people have borne the cost. To all Americans in every city near and far, small and large from mountain to mountain, from ocean to ocean, hear these words: You will never be ignored again.â€

As Trump steps into office, here are the proposed policy changes he wants to make, from healthcare to immigration. Domestically, the new commander-in-chief has vowed to undo signature achievements by the Obama administration, including actions on climate change and healthcare. He is adamant on launching big initiatives on tax and infrastructure, and will also make adjustments to the Supreme Court by appointing at least one judge.

Overseas, he could tremendously change U.S. relations with Russia, China, and EU, and he has promised to “drain the water outâ€ of the nuclear deal with Iran.

After a tumultuous transition, Trump enters into the most powerful position in the world as the least popular president in at least four decades. But according to a Washington Post-ABC News poll, Americans express optimism that he will keep his campaign pledges.

Focus on Being Nimble as You Embark on Your 2017 Goals

Is Your Company Ripe for Venture Capital?