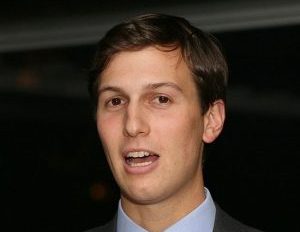 A White House transition official announced Monday thatÂ President-elect Donald Trump will appoint his son-in-law, Jared Kushner, as one of his senior advisers.

Speculation that Kushner would join the Trump administration began to circulate after he and his wife, Ivanka Trump, bought a $5.5-million home in Washington, D.C. last week. Kushner has also relinquishedÂ his role in running his family’s lucrative real estate business.

In spite of nepotism laws, Trump can legally hire Kushner as long as he doesn’t receive a salary. A legal rep for Kushner released a statement Monday saying,Â “Mr. Kushner is committed to complying with federal ethics laws and we have been consulting with the Office of Government Ethics regarding the steps he would take,”Â reports NBC News.

Kushner played a key role in Trump’s presidential campaign, advising his father-in-law on campaign strategy, business interests, and data operation as well as serving as a liaison meeting with powerfulÂ people and foreign governments.

Following his election, Trump turned over his family real estate business to his children.

Last week,Â Omarosa Manigault accepted aÂ position in the Trump administration working as a public liaison. Back in July, she was hired as Trump’s director of African American outreach to help the controversial billionaire court black votes on the campaign trial. However, before signing on to join the real estate mogul in the White House, Manigault was a lifelong Democrat, who had publicly declared support forÂ Democratic presidential nomineeÂ Hillary Clinton back in 2014 in a tweet.

â—ï¸I’m Ready for Hillary. Are youâ” #Hillary2016 – RT and ask your friends to join @readyforhillary: http://t.co/jhOk6W6YIF

The 42-year-old TV personality also worked for formerÂ Vice President Al GoreÂ under theÂ Clinton administration and on President Obama’s 2008 campaign. Previously, she developed a reputation as an infamous rabble-rouser on the first season of Trump’s hit reality seriesÂ The Apprentice.Â

I Took Toyota’s New Space Age Car for a Ride

You’ve Got Diversity All Wrong