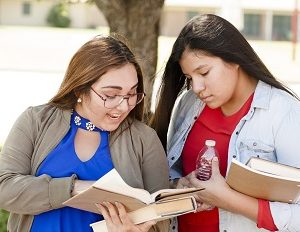 You’ve heard of HBCUs (historically black colleges and universities), but do you know about TCUs? Tribal Colleges and Universities were established by Native Americans to not only educate themselves, but to preserve native culture, languages, and traditions.

The first and largest TCU, Navajo Community College, now DinÃ© College, was founded by the Navajo tribe in 1968. Today, there are 35 accredited TCUs in the United States, and all have open admission policies. Fourteen of these institutions offer accredited bachelor’s degree programs; five, master’s degree programs; 35, associate degrees; and 29, certificate programs.

TCUs are located on or near Indian reservations, mainly in the Midwest and Southwest. According to the American Indian HIgher Education Consortium, they “operate more than 75 campuses in 16 states–virtually covering Indian Country–and serve students from well more than 230 federally recognized Indian tribes.â€

Although TCUs serve more than 17,000 Native students, a significant number are nontraditional: almost half are older than 25, and 25% are single parents. Also, 62% are female, and 64% are full-time students. You don’t have to be Native American to enroll at a TCU. Non-Native American/Alaska Natives make up 22% of the combined total enrollment at TCUs.

The Need for TCUs

According to the American Indian College Fund, American Indians account for only 1% of all college students, onlyÂ 13.6% earn a college degree because of theirÂ unique challenges. In addition, more than 28% live below the poverty line; the national poverty rate is 15.5%.

In 1973, the first six American Indian tribally-controlled colleges established the American Indian Higher Education Consortium, or AIHEC, to provide a support network, as they worked to influence federal policies on American Indian higher education. In 1994, the Equity in Educational Land-Grant Status Act of 1994 provided land-grant status to TCUs, making federal funding available to them.

However, despite this legislation, TCUs are the “most poorly funded higher education institutions in the United States.â€ The average cost of attendance at TCUs during the 2014—15 school year was approximately $16,355, including tuition, room and board, and books.

There are colleges and universities in the United States that offer free in-state tuition/tuition waivers as well as transfer and/or dual admission agreements to TCU students, who belong to one of the 566 federally recognized American Indian tribes. For example, eligible Native Americans residing in Michigan and Montana can have their tuition waived at public two- and four-year institutions, through the Michigan Indian Tuition Waiver and the Montana University System American Indian Undergraduate Tuition Waiver program. However, room and board, books, and other fees are not covered by the waivers. The North Dakota University System has transfer agreements with the five tribal colleges in North Dakota. Other TCUs, such as Chief Dull Knife College, have transfer agreements with other colleges and universities not only within their state, but outside, as well .

This article was written by Chelsea L. Dixon, M.S., M.A.T., Â who is founder and CEO of GamePhox Unlimited L.L.C. and the author ofÂ ‘Bridging the Gap: A Simple Guide to College.’ To learn more, visitÂ www.gamephox.com.Â

Struggling With Stress? Giving Can Boost Your Health and Wellness