Treasury to Put a Woman on the $10 Bill 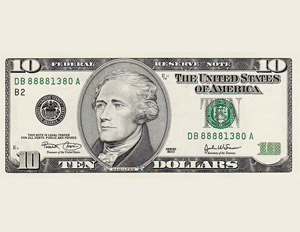 On Wednesday, U.S. Treasury Secretary Jack Lew announced that a woman will be featured on a redesigned $10 bill in 2020, which marks the 100th anniversary of the Constitution’s 19th Amendment, which gave women the right to vote.

The last woman to appear on American currency was Martha Washington, who was on the $1 Silver Certificate between 1891 and 1896. While a final decision on who will be featured on the $10 bill in 2020 won’t be made for several months, the department is launching a website and asking for input over social media with the hashtag #TheNew10.

[Related: New Money: Harriet Tubman Could Be the Face of the $20 Bill]

Earlier this year, the nonprofit Women on 20s started a petition to reface the $20 bill with a woman. After surveying 100 historians and experts, the organization decided on 15 worthy candidates, including Rosa Parks, Harriet Tubman, Sojourner Truth, Shirley Chisholm and others to replace former President Andrew Jackson by 2020. But since the Treasury has already pegged the $10 bill as the next currency to be updated, the conversation has since switched to who will replace Alexander Hamilton by 2020.

“We have only made changes to the faces on our currency a few times since the bills were first put into circulation, and I’m proud that the new ten-dollar bill will be the first bill in more than a century to feature the portrait of a woman,” CNN reports Lew saying.

Hamilton, who was the nation’s first treasury secretary, has been on the $10 bill since 1929. He replaced Jackson, who was the seventh president, and who is on the $20 bill today.

The Best Barbecue Restaurants In America