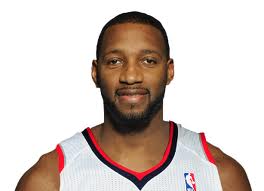 According to an ESPN.com report, Tracy McGrady knows what he’s doing on the hill.

McGrady is trying out for the Sugar Land Skeeters of the Atlantic League and at least one of the Pittsburgh Pirates’ top prospects who stood in the batter’s box likes what he saw.

McGrady, trying out as a pitcher for the Sugar Land Skeeters of the independent Atlantic League, threw to stand-in hitters for the first time in a 20-minute bullpen session Monday and impressed, according to a local TV report.

“He’s so tall and his arms are so long. His downward slope, you’re not going to see that too often,” Barnes, a minor league outfielder in the Pittsburgh Pirates’ organization, told KRIV-TV. “When you have a presence like that on the mound, it’s really hard to settle in and be comfortable hitting.”

Barnes, a first-round draft pick for Pittsburgh in 2012, was among the minor league hitters who stood in the batter’s box as McGrady threw, and he said the two-time NBA scoring champion could use his length to add perceived speed to his pitches.

“Say his [velocity] is 87, but with his arms and his body, it feels like it’s 90-91,” Barnes said, according to the Houston Fox affiliate.

“His velo might [be] lower, but it feels like it gets on you way faster,” added Barnes, a Sugar Land native chosen 45th overall in 2012 by the Pirates.

McGrady reportedly has solicited the help of Roger Clemens.