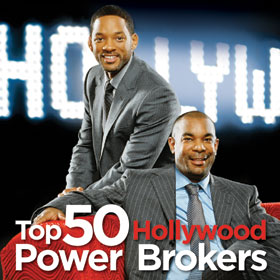 From media titan Oprah Winfrey to megastar Will Smith, powerful forces in Hollywood are controlling the content that millions across the globe watch in movie theatres, on their laptops, and at home. Not only have they kept audiences riveted to the big and small screens, these members of the entertainment elite have grossed billions for movie studios, television networks, advertisers, distributors, exhibitors, and, of course, themselves.

BLACK ENTERPRISE has developed a strong reputation for identifying superstars in industries ranging from finance and technology to law and medicine. In this issue, we unveil our Top 50 Power Brokers in Hollywood, a roster of extraordinary entertainment professionals and entrepreneurs from the creative and business sides of the industry. These actors, agents, directors, producers, executives, lawyers, and distributors wield considerable power when it comes to green-lighting multimillion-dollar projects or influencing decisions related to theatrical releases, television shows, and other forms of filmed entertainment. What makes this roster all the more extraordinary is that its members have broken barriers in an arena that historically has been inhospitable to African Americans and, at the same time, served as change agents in every nook and cranny of the industry.

Our team of editors and researchers spent several months researching the activities of these superstars: uncovering the cumulative gross box-office receipts of top talent, the Olympian deals completed by Ã¼beragents and master lawyers, and the bottom-line contributions of high-powered execs. On the next few pages, you’ll find out how our Top 50 Power Brokers are changing the script in Hollywood.

Will Smith/James Lassiter. Overbrook Productions. Ages: 38/42. Who on this planet doesn’t know Will Smith? With multiplatinum albums, billion-dollar box-office receipts, and production credits on several blockbusters, Smith is a triple threat in Hollywood. But who is James Lassiter? Many don’t know that he’s the man behind the man. He’s the strategist behind the megastar. “The brains behind the brand!” exclaims Smith, during his exclusive interview with BLACK ENTERPRISE.

Through their prolific production company, Overbrook Entertainment, this dynamic duo produced the recent box-office smash, The Pursuit of Happyness, which at press time grossed $138 million. Released by Columbia Pictures in December 2006, this biopic of Chris Gardner’s ascent from a struggling, homeless father to a successful stock broker opened at No. 1 and remained in the top 10 for five weeks.

Overbrook is no stranger to producing hits. Theatrical releases such as the biopic Ali (2001), which earned Smith Academy Award and Golden Globe nominations; sci-fi thriller I, Robot (2004); and romantic comedy Hitch (2005) have grossed a combined $475.8 million in box-office receipts and video/DVD sales. The 9-year-old company has a library of eight films so far and several others in the pipeline. Smith, however, was genuinely surprised at the success of The Pursuit of Happyness, which earned him another Golden Globe nomination. “It’s pretty much what we expected,” Smith jokes. “No. We absolutely did NOT expect for