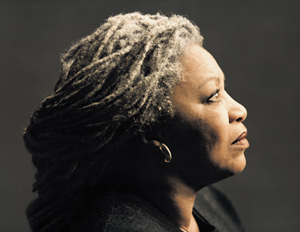 There’s always room for debate surrounding the talent of mainstream’s biggest and brightest stars. But in spectators’ sea of opinions, a select few claimsÂ have proven factual: Lupita Nyong’o is one of the most beautiful beings toÂ walkÂ our planet, Oprah is an earthly angel, and Toni Morrison is undoubtedly one of the best writers to grace existence. The wielder of words stole the world’s hearts with works like Beloved and Song of Solomon. Of the PresidentialÂ Medal of Freedom recipient, President Obama said, “…Toni reaches us deeply using a tone that is lyrical, precise, distinctive and inclusive.”

Literary admirers couldn’t agree more, which is whyÂ artists, scholars, philosophers andÂ all lovers of artÂ grew in joy when Knopf announced that Morrison would beÂ gifting us with a new novel AprilÂ 2015! GodÂ Help the Child is the title of theÂ new read, and Jason Parham at Gawker Review of Books already declared it “The Best Book of 2015.”

The synopsis, as reported on Gawker, is:

Spare and unsparing, God Help the Child is a searing tale about the way childhood trauma shapes and misshapes the life of the adult. At the center: a woman who calls herself Bride, whose stunning blue-black skin is only one element of her beauty, her boldness and confidence, her success in life; but which caused her light-skinned mother to deny her even the simplest forms of love until she told a lie that ruined the life of an innocent woman, a lie whose reverberations refuse to diminish…Booker, the man Bride loves and loses, whose core of anger was born in the wake of the childhood murder of his beloved brother…Rain, the mysterious white child, who finds in Bride the only person she can talk to about the abuse she’s suffered at the hands of her prostitute mother… and Sweetness, Bride’s mother, who takes a lifetime to understand that “what you do to children matters. And they might never forget.”

Toni Morrison’s career spans over two decades, full of countless awards that reflect its invaluable contribution to art and humanity. GodÂ Help the Child will be available April 1.