To Dismay of Some, Wizards, Adidas Begin Selling 'House of Guards' T-Shirts 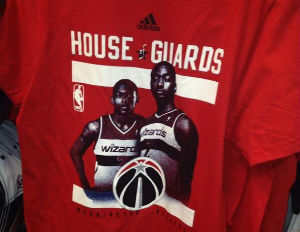 If you are a Washington Wizards fan, you’ve had plenty to cheer about this season. After a huge payout to franchise guard John Wall, he made the All-Star team, proving without a shadow of doubt that signing him was the right move. Then rookie guard Bradley Beal can really, really play. If center/power forward Nene can get healthy, the Wizards might be primed for a deep playoff run.

But an interesting t-shirt popped up recently, one that’s raising a few eyebrows in the nation’s capital.

There may not be a more popular TV show than ‘House of Cards’ — and you’ve gotta admit ‘House of Guards’ is a pretty cool play on words.

Twitter user @HoopDistrictDC confirmed that the shirt was running customers $35.

House of Guards t-shirts are in fact available at Verizon team store. They'll cost you a half a tank of gas ($35) pic.twitter.com/SCRHeiU6cU

Then came this tidbit from the Washington Post’s Dan Steinberg, from an L.A.-based comedian who claimed to have come up with the concept.

Many people in Washington are obsessed with ‘House of Cards,’ an obsession that seems to have peaked over the past month or so.
A smaller number of people in Washington – at least, judging anecdotally – are obsessed with the Washington Wizards, although those numbers are also rising.
Anyhow, L.A.-based comedian and writer Joe Mande cleverly combined these two things about a month ago, creating a ‘House of Guards’ motif.

Here’s what Mande came up with, and it’s pretty sweet.

I got bored and made this for @John_Wall and @RealDealBeal23. pic.twitter.com/but0aC6H6m

On Saturday, the Verizon Center team store began selling the shirt. “According to a team spokesman,” Steinberg writes, “these shirts were a collaboration between Adidas and the Wizards, with the initial idea to use the phrase coming from Adidas.”

In this Internet age, it’s tougher and tougher to attribute intellectual property when cool ideas like this one come along. Here’s to hoping Mande gets his due — one way or the other.