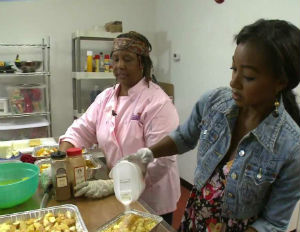 It’s been two years since Chicago’s Classic Cobbler moved out of its home-based digs and into a retail shop on the 200 block of the highly trafficked Dixie Highway. A specialty shop that encourages customers to call ahead and then come pick up their piping hot fruit cobblers on the way home from work, Classic Cobbler sells its products by the slice or serving or in dinner, family, and party sizes. Prices range from $4 a slice to $48.99 for a party-sized dish. The company also sells cakes and other baked goodies, but cobblers and pies make up its core business. Classic Cobbler has grown steadily since opening its doors in 2009, generating revenues of $105,000 in 2011 and about $200,000 in 2012.

Today the family-run business has its eye on a big prize–to outpace direct competitor Bakers Square, a 40-year-old bakery and restaurant located in the Great Lakes area. “Our long-term plan is to become the next Bakers Square,â€ saysÂ  Bran’Arla Johnson, 51, managing partner, who founded the company with her mother, Bonnie Thompson, 71, also managing partner, and brother, Paul Glenn, 34, director of sales and marketing.

After baking for family events for years, the mother and daughter took their love of cooking to a professional level by opening Classic Cobbler. Working out of Thompson’s kitchen, they perfected a menu of fresh-baked pies before opening a retail location.

During that “testâ€ phase, the two purchased mixers and other baking equipment. They funneled back into the business any profits they made that first year. When it came time to open their retail shop, the duo invested $60,000, using about $40,000 to build out or improve the shop; the rest covered the costs of a stove, refrigerator, freezer, and more mixers.

Finding the right spot for Classic Cobbler was painstaking. Key criteria included an affordable lease rate, steady foot and vehicular traffic, and proximity to other eateries. (Classic Cobbler is a cafÃ© style store.) The owners began scouting for possibilities early in 2010.

When a new strip mall broke ground at a large intersection in Chicago’s south suburbs, Johnson started researching the region’s demographics, the income levels of area residents, and the types of tenants that were slated for occupancy in the mall. And Bakers Square was located just three blocks away. “We wanted people to see our location as they headed down the street to Bakers Square,â€ says Johnson. (That Bakers Square location has since closed.)

Johnson, who started working with the shopping center’s leasing agent to arrange a deal, liked the fact that a florist, breakfast restaurant, and deli would be tenants in the mall. “We knew that we’d get a lot of foot traffic from those other businesses.â€ But just when signs seemed to point in Classic Cobbler’s favor, management changed hands. “We had to start the whole process over again with the new owner, who wanted to review our presentation and business plan,â€ says Johnson. “Fortunately, he liked our concept and gave us an opportunity.â€ They opened in November 2010.

Chicago has the third-highest retail rents in the U.S. However, monthly rent for the 1,195-square-foot Classic Cobbler is a very affordable $2,000.

Always looking to boost its sales, the company, which has been featured on WGN-TV Chicago, relies on both traditional news outlets and social media to promote its discounts and customer reward programs. Classic Cobbler has also formed partnerships with organizations such as the Flossmoor Country Club. “We know that foot traffic only goes so far,â€ says Johnson, who has also tested coupon marketing options such as Groupon, Living Social, and Valpak.

Classic Cobbler plans to expand. Johnson is eying retail locations in Atlanta (with the aid of relatives in the area who have tapped angel investors). For now, the Chicago family trio is striving to achieve the difficult balance between increasing sales volume by wholesaling to grocery stores and maintaining consistent freshness, taste, and quality. “No matter how big our company gets,â€ says Johnson, “we don’t ever want to lose that.â€