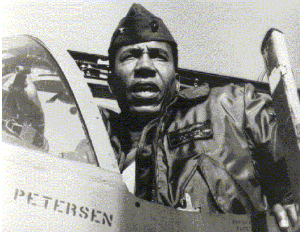 On Feb. 23, 1979, Frank E. Petersen Jr. became the first African American general in the United States Marine Corps, making history. Petersen was born March 2, 1932, in Topeka, Kansas, the second of four children. He was an intelligent, athletic youngster who played football in middle school. He graduated from Topeka High School in 1949. Petersen performed so well on the examination for the U.S. Navy that the recruiter was astonished and made him take the test over.

After earning bachelor’s and master’s degrees in International Affairs in 1973 from George Washington University, he attended the Amphibious Warfare School and the National War College in Washington, D.C. He joined the Navy as an electronics technician in 1952, and was accepted into the Naval Aviation Cadet Corps. He was commissioned as a second lieutenant in the Marine Corps after completing his training, becoming the first black pilot in the Marine Corps.

During the 1950’s, the U.S. military was more desegregated than it had been in the past; however , there was still racial tension. In October 1952, Petersen became the first African American to become a Marine aviator. The following year he fought in the Korean War, during which he flew more than 60 combat missions and was honored withÂ six air medals and the title of “Distinguished Flying Cross.”

[Related: This Day In History- ‘Home Run King’ Is Born]

Petersen married his first wife, Eleanor, in 1955; they had three children. He fought in the Vietnam War, commanding attacks. Shortly afterwards, he received the Legion of Merit and Meritorious Service Medal for his excellent duties. In addition, he was awarded the coveted Robert M. Hanson Award for the Most Outstanding Fighter Squadron of 1968. In 1975, Petersen married Alicia Downes; they have a daughter, Lindsey.

On this day in 1979, President Jimmy Carter made Petersen the first African American general in the U.S. Marine Corps. He was also named NAACP Man of the Year. In 1986, Petersen became the Marine Corps’ first African American three-star general. After retiring in 1988, he became vice president of DuPont Co. and has been a guest speaker at many institutions. Petersen published his autobiography in 1998, which highlights the obstacles he faced, regarding not only the war, but racism as well. Petersen is widely recognized for his dedication in serving and protecting our country; and he has helped lead the way for more African Americans to follow in his footsteps in the Marine Corps.