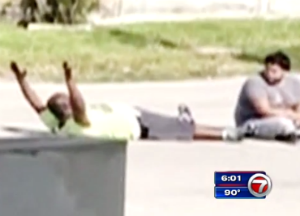 On Monday, Charles Kinsey, 47, was attempting to soothe one of his patients when the North Miami Police decided to open fire on him.

In cell phone footage released on Wednesday, Kinsey is seen trying to coax his escaped 23-year-old autistic patient back to theÂ MacTown Panther Group Homes, where Kinsey is employed as a behavioral therapist.

In the video, Kinsey can be clearly seen lying on his back with his arms in the air, sitting next to his patient in the middle of the street, as he attempts to reason with the officers.

According to North MiamiÂ Assistant Police Chief Neal Cuevas, the officers were responding to a 911 call regarding a man holding a gun and threatening to kill himself.

Apparently, the “gunâ€ was actually the toy truck Kinsey’s autistic patient was holding.

The cell phone shows Kinsey pleading with the officers not to shoot him, as he tries to explain his patient is not a threat.

“All he has is a toy truck,â€ Kinsey yells. “I am a behavior therapist at a group home.”

Kinsey can also be heard trying to keep his patient calm, “Rinaldo, please be still, Rinaldo. Sit down, Rinaldo. Lay on your stomach.â€

The video ends before Kinsey is shot, but he recounted the rest of his traumatizing experience in an interview with WSVN from his hospital bed.

Kinsey said that he complied with all orders made by the rifle-wielding officers.

Kinsey’s lawyer,Â Hilton Napoleon, who first released theÂ cell phone footage on Wednesday,Â told The Miami Herald that he is already discussing a settlement with the city.

“They realize this was something inappropriate regarding the shooting,â€ he said.Â “There’s no justification for shooting an unarmed person who’s talking to you and telling you that they don’t have a gun, and that they’re a mental health counselor.â€

During a news conference on Thursday, North Miami Police Chief Gary Eugene confirmed that his department was handing over the investigation to the Florida Department of Law Enforcement.

“The State Attorney’s Office is also looking at the case. Bringing in an outside agency shows our commitment to transparency and objectivity in a very sensitive matter,” Eugene said.

Eugene would not identify the officer responsible for shooting Kinsey, but confirmed that he is on administrative leave.

On Wednesday, the Circle of Brotherhood, a community activist organization that Kinsey belongs to, gathered in front of the North Miami Police Department. According to WSVN, they were looking seeking more information on what happened to their friend.

Kinsey’s attorney told Channel 10 that Kinsey is “traumatizedâ€ and “speaking to a psychiatrist.”

Dealing with Debt? Take These Steps