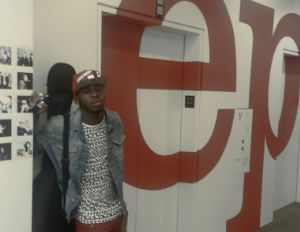 The first season of The X Factor may have come to an end in 2011, but that doesn’t mean the show is over for R&B soul singer Marcus Canty, who finished 4th during the talent show’s first run.

Born and raised in Washington D.C., the now 22-year-old performer knew entertainment was his calling early on. Canty entered a talent competition called Talent Rock in Orlando, FL when he was 15 years old. After doing a cold read for judges in the audition room, the now Epic-signed artist received a call from show coordinators offering him a scholarship to a prominent film and acting school in New York City for the summer.

“There I fell in love with the acting and television scene,â€ says Marcus.

Fast forward five years, and Marcus found himself working with an acting coach and singing his heart out for millions of Fox network viewers. Although he didn’t win The X Factor champion title, he caught the eye of famed record executive L.A. Reid–who served as a judge on the show–and it wasn’t long before the music mogul took the budding singer under his wing and signed him to Epic Records.

With his debut EP, This…Is Marcus Canty, currently available in stores and iTunes, the versatile entertainer is ready to build his brand. Taking a break from putting together his upcoming Internet sitcom, Marcus Canty sat down with BlackEnterprise.com at Epic Records’ Midtown Manhattan offices to talk about his breakthrough moments in music, what it’s like to be so young in such a dog-eat-dog and industry and what it will take to know he’s made it to the top. Let the show begin!

Black Enterprise: For being so young, you’ve gone pretty far in this business? With a single already placed in a movie, how does it feel to know you’ve accomplished so much?

Marcus Canty: A lot of things that happen in my life come to me sometimes, and I’m not even prepared for it. It’s really more or less a blessing for me. [Being] on that Think Like A Man soundtrack was definitely a good start. I’m just excited ’cause I finally get a chance to do what I love to do: perform and do music. It was coming off X-Factor, and I didn’t win…it’s kind of like they usually say that people that go on the X-Factor that don’t win do a little better.

Black Enterprise: You’re now signed to Epic Records and have L.A. Reid in your corner. Do you think you’ve reached success?

Marcus: I don’t think I’ve defined success yet. I feel like I’m in the process of being very successful, [but] I feel like it will take time. I’m patient with my music and my career [and know] it takes its time.

Black Enterprise: What do you think that moment will be when you can say, ‘I’ve made it!’?

Marcus: You know what, it’s probably a couple moments! I gotta get a BET award. I don’t know why, but ever since I was a kid, a BET [award] is something I’ve always wanted to have for some reason. BET Awards–when you’re a kid–it’s like everybody’s there. But as you [grow] as a musician it becomes more about the Grammy. [And] then I wanna sell out Madison Square [Garden] of course. That’s when you know now you’re doing something.

Black Enterprise: You’re growing up in music when things are constantly changing. Do you classify your sound as R&B or something else?

Marcus: I feel you! Nowadays, you got R&Pop or R&Hip-Hop. R&B is the core of my music because I grew up in the church singing soulful music. I listened to soulful artists such as the Stevie Wonder’s, the Marvin Gaye’s, the Teddy Pendagrass’. I’m a very versatile artist, so my R&B [brings] together vocals as well as the hard track.

Black Enterprise: Do you think R&B has transformed over the years?

Marcus: Throughout time, the lyrics have kind of gone a different way. R&B and hip-hop have intertwined even more. They started it early on, but now it’s like R&B and hip-hop are one. Nowadays, you don’t know whether people are singing or rapping. It’s a different time, but I like the time. As I grow up, when I get 30 or 40, music’s gonna say something else. Music is a language.

Black Enterprise: As a businessman and a brand, what goals do you have to build yourself up beyond singing?

Marcus: I took up acting a long time ago, so I do plan on doing acting. I [also] plan on doing music, not only as a singer, but as a producer and musician. As a businessman, I have to make sure I keep myself in a lot of different avenues in entertainment. I have a non-profit organization called Y.A.M.A.D., Young Artists Making A Difference. [The organization] is to help kids in the school system.

With these school systems today, music has kinda slid out a little bit. I started my non-profit so that one day I can maybe start a school, and help different kids get instruments for their school classes. When I was growing up, I remember kids struggling trying to go on trips, kids struggling to find instruments, so now this is my chance to have myself everywhere. I [also] have my own entertainment company, Marcus Music. I hope to [turn] it into a label soon, but right now we’re starting it so I can brand Marcus Music the brand.