'The Watsons' Movie Takes us Back Into The Civil Rights Movement 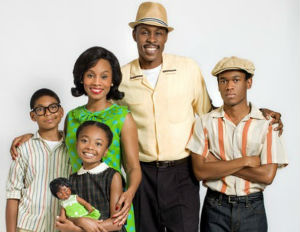 A new Hallmark movie highlights the civil rights movement through the eyes of a middle class African-American family, according to TheGrio.

The Watsons travel from Michigan to Birmingham in 1963 during the integration of schools.

The movie, which is set to premiere around the 50th anniversary of the 16th Street Baptist Church Bombing on Sept 20th, hopes to highlight that event which seems to be a catalyst of the Civil Rights Movement.

One of the shows stars’, Wood Harris, had this to say about the movies message.

“All throughout history, it’s like that. We just inherit the past, and nobody knows what to do with it, and then we get some event that reminds us…Rodney King, Boston bombings,Â Trayvon Martin, there’s a list of them. They’re all great big deals. In 1963, the bombing of a church, and for four little girls to die, I don’t think anybody should forget that.â€