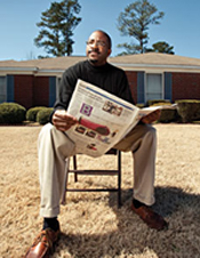 Despite lifelong periods of sadness, excessive drinking, and social withdrawal, Stephen Akinduro had little inkling that he was depressed and never connected his symptoms to his risky behavior. So Akinduro, a trained pharmacist, didn’t seek therapy until his sexual promiscuity and pornography addiction began to confound his life and finances. “I just wanted a quick fix for my behavior, a set of rules and guidelines on how to behave so I could feel normal,â€ the 38-year-old Columbus, Georgia, resident recalls.

His therapist probed into his childhood and eventually revealed the root of Akinduro’s depression. When he was 8, his mother committed suicide after enduring years of abuse from his father. Akinduro witnessed the abuse. “I never cried at my mother’s funeral. My father told me ‘big boys don’t cry’ and I sucked it in.â€

For Akinduro, a depressive episode that would spiral into a catastrophe could be triggered by a relationship breakup or a challenge at work. But like many sufferers he had learned to mask his depression. One supervisor suspected his secret after a heated verbal exchange at work that followed a co-worker’s racially insensitive remark. “I was shocked that he picked up on it but I didn’t want to share my problems with a stranger,â€ says Akinduro, who was eventually told he had bipolar disorder.

Akinduro is one of the roughly 14 million Americans who suffer from a form of depression each year. The disorder is characterized by mood fluctuations, low self-attitude, and five or more symptoms that persist for at least two weeks. These include mood disturbances, difficulty concentrating, psycho-motor retardation (slowing down of function), inexplicable crying, irritability, feelings of impending doom, lack of interest in leisure activities, decreased libido, and social withdrawal. Sufferers may also experience polar behavior such as lack of appetite or overeating and constant sleeping or sleeplessness. Bipolar individuals may engage in high-risk sexual activity. If symptoms persist, they can drive sufferers to commit suicide.

Depression is more intense than the normal feelings of sadness or loneliness that everyone experiences occasionally. It is also different from the grief experienced within two months of the loss of a loved one. Major depression, also called clinical