Kenji Summers: Inspiring a Generation of Youth to Explore the World 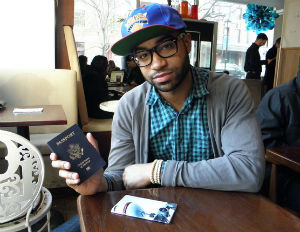 Kenji Summers is a 20-something entrepreneur and world traveler who seeks to show other young people the joys of globetrotting through theÂ Passport Project. The New York native is on the steering committee for the AdColor Awards and is co-founder of the Marcus Graham Project.

His latest venture, the Passport Project, is all about removing real and perceived barriers to international travel and opening up a new world to millennials.

BlackEnterprise.com chatted with Summers about the Passport Project, the hip hop song that inspired it and his plans for the future.

BlackEnterprise.com: What inspired you to create the Passport Project?

Kenji Summers: In 2008, I was listening to music on my computer. I Was listening to a song by Lupe Fiasco featuring Pharrell, Q-Tip and Sarah Green calledÂ “Paris, Toyko Remixâ€. I was inspired by the song because I wasn’t expecting it. Everybody brought their A-game. I was 22 and did not have a passport at the time time. Pharrell said “Fly to Paris and end up in Tokyo. Let’s start a coalition, so even the broke can go.”

I took off work from my advertising job the next day to go to the post office and I applied for my passport. A few weeks later, I had a passport and a new phase in my life started.

What was your first international trip?

In May of 2009 a friend said she was going to Barcelona and she got a round-trip airline ticket for like $300. It ended up being about 10 of us and for most of us it was our first trip abroad. We stayed at hostels, rode bikes, it was just really cool. It was before Twitter was massive, so I was putting images on my blog and it seemed like my friends were really responding positively to it.

So, what made you specifically go for the issue of getting people passports?

I was working in advertising at the time, so I looked up passport holder demographics. I found that 37% of Americans own passports.Â  Compare that with 60% of Canadians and 75% of UK citizens.

And really, I got to thinking that I need to be an American that understands multi-culturalism. Before I traveled, I didn’t respect things like that there are people who only speak Spanish, for example. That was something that I came to understand after I was exposed to different cultures.

I was thinking like, “How can I help people who do not have the resources to travel?â€ In 2011, I took the idea public. It was not just a “blackâ€ idea or even a “millennialâ€ idea. It’s something everyone can appreciate.

Where have you been since you got your passport?

I won’t ask any questions about that return trip to Amsterdam, but you have to go to Tokyo!

Right! I would love to take a red eye from Paris and fly to Tokyo. It’s definitely on my list.

How exactly does the Passport Project work? How does it fulfill its mission of inspiring young people to travel abroad?

Well, right now I feel like we’re still in beta. We’re constantly looking for ways to get our message across to young people, especially young people who come from under-privileged backgrounds. International travel can be life-changing. I feel encouraged when I get messages from people who say they were inspired to travel because of something they saw from us. But we kicked things off with a grant system. We put up the application onÂ Tumblr and had a multi-platform process that involved utilizing different types of media. One of the winners from that initial grant program was a young streetwear designer and art director from Texas namedÂ BryanBlue. We got him his passport and we took him to Equatorial Guinea as part of a group. We filmed that experience. We haveÂ four episodes up of that.

Will there be more videos?

Definitely. I loved working with Blue. He has such a great story and we need to show more of those kinds of stories. We’re going to do it bigger. It’ll be a series where we feature a different young person in each episode. It’s all about inspirational content.

You say “weâ€ a lot. Who are the other people on the team?

How many hours a day do you work on the Passport Project?

On average, I put in about 12 hours a day. When I worked in advertising, I was working for someone and always had a client, always had something to occupy my time whether I was actually passionate about it or not. But now, I have something that I really do care about.

What’s next for the Passport Project?

We’re moving ahead with applying to different fellowships and programs to help fund our ideas. I want to increase awareness. I want to empower young people so they can fund their own trips–particularly young people outside of the college system who normally would not have access to international travel for various reasons. Other than that, we’re working on Passport Life products. We’re creating t-shirts, passport covers, phone covers, water bottles, the whole nine.

That’s a tough question, but if I had to choose just one, it would beÂ “Energy Flowâ€ by Ryuichi Sakamoto.