She’s the First Lady of the United States–and the First Lady of Fashion–with a style influence so strong it’s boosting not only brand exposure, but bottom lines of designers and retailers. According to the Harvard Business Review, Michelle Obama has created $2.7 billion in value for 29 companies simply by donning their clothing.

With such a market influence, some may wonder how the “Mrs. Oâ€ factor has affected Black consumers, whoseÂ  spending on apparel products and services is at $27 billion, and Black designers, who often struggle for recognition in the fashion industry. Amnau Eele, co-founder of the Black Artists Association, expressed her concern in a January 2009 Women’s Wear Daily article, questioning the lack of inclusion of African-American designers in Mrs. Obama’s collectionÂ , and urging the firstÂ ladyÂ to wear their clothing.

Slideshow: Click here to see some of Michelle Obama’s looks and theÂ designers who have benefitted from the Mrs. O Fashion Effect.

How to Find a Manufacturer for Your Invention 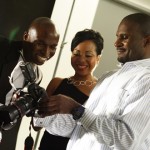 Go Behind the Scenes of Our November Cover Shoot