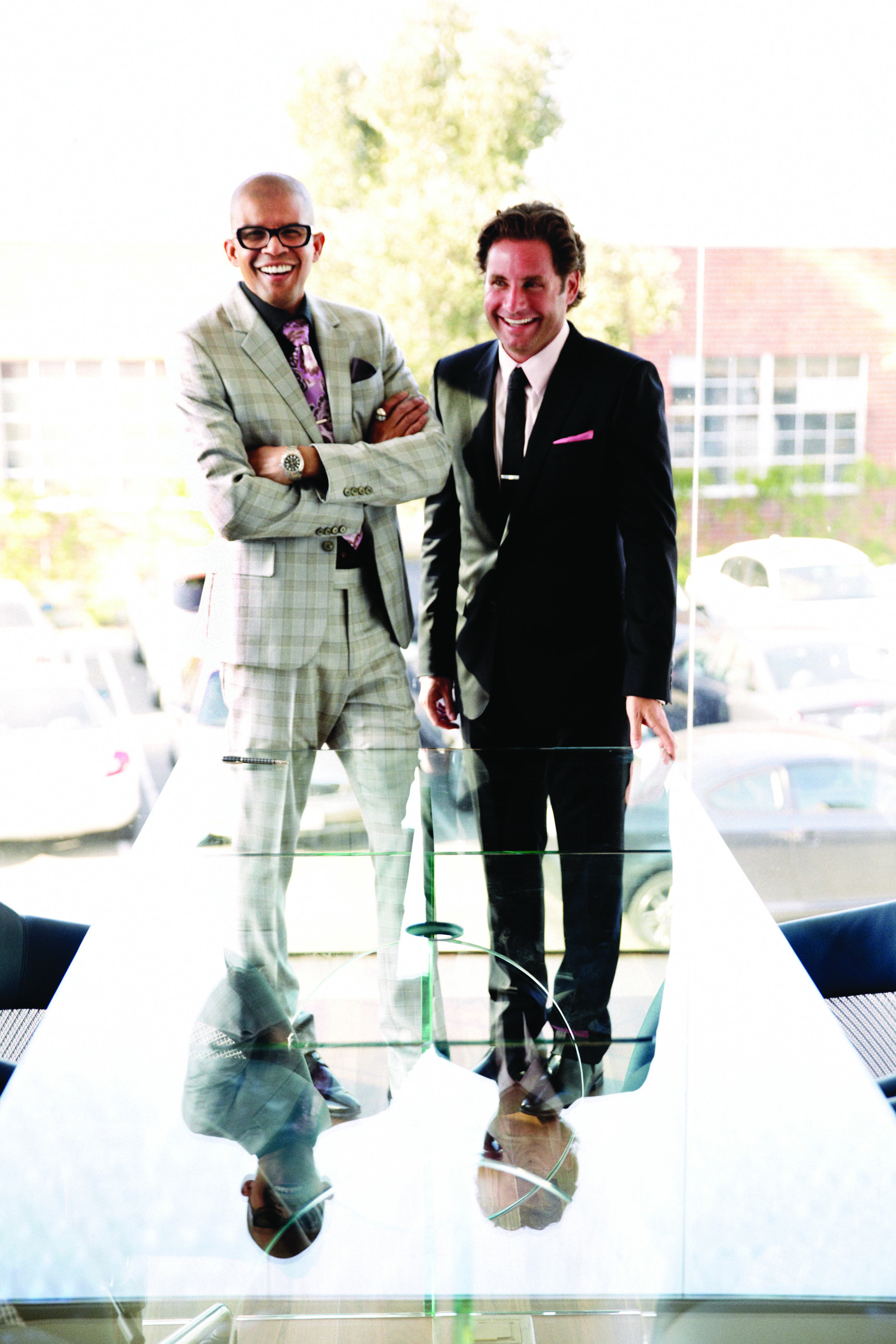 Walton (L) and Isaacson bring the magic to their agency's campaigns.

In 2005, Aaron Walton and Cory Isaacson sat in a coffee shop in Chicago’s Gold Coast Historic District working on what they hoped would be a magic formula that would create, in their words, “the planet’s most interesting agency. Like a pair of alchemists laboring over complex formulas, the two spent hours in the shop fitting together the components of what would eventually become their business plan.

Walton and Isaacson wanted to create something that, according to the two men, didn’t exist. “The first thing we talked about was the type of people we wanted to work with,” recalls Walton. “Not the clients. Not even the revenue. Because we knew that–if we had the right mix of people that had diverse backgrounds, not just in terms of skill set, but culturally diverse–that combination would ultimately provide us with bigger, more inclusive ideas.”

From that bold thinking sprang Walton Isaacson (No. 2 on the BE advertising agencies list with $51 million in revenues), a firm that blends science with sorcery by fusing in-depth research and highly targeted marketing with top-tier creativity to deliver a particular message. With a client list that includes Jim Beam Brands, Verizon Wireless, Lexus, and Unilever Brands, the agency recently added the Los Angeles Dodgers, McDonald’s, Toyota Financial Services, and Samsung.

As a result of that growth, the firm increased its number of employees by 31% from the end of 2011 to the end of 2012. It now employs 130 team members in its primary offices in Los Angeles, Chicago, and New York, and additional offices in Miami and Tokyo. Not satisfied to limit itself to producing creative advertising campaigns, Walton Isaacson has gone into content creation and development with Verses and Flow, an NAACP Image Award-nominated variety show featuring poets and singers that is entering its second season on TV One. In recognition of Walton Isaacson’s creativity and ability to flourish in an industry where many continue to struggle, Black EnterpriseÂ  has named it the Advertising Agency of the Year for 2013.

Conjuring Campaigns
There’s far more to a successful advertising campaign than captivating slogans and spellbinding imagery. The magic begins with in-depth research. “What we always try to do is get an understanding of who we are talking to, says Ed Han, the firm’s executive creative director. “Multiple consumer segments and then strategy are involved in just understanding the demographics and psychographics of [targeted consumers], in terms of their age and their attitude toward the client.â€ The research helps the team better understand how to communicate with a particular group and the best way to craft and deliver the client’s message.

The next step focuses on developing the creative platforms–a trial-and-error process not unlike trying on items of clothing to see how they fit and feel before committing to a purchase. From there it’s narrowed down to a few concepts which the creative teams bring alive through various media, be it print, radio, billboards, digital, or TV. “The creative process is very much like, ‘What if we do X? What if we do Y?'” says Colin Costello, senior creative director. “If we have a good strategy we should be able to create really provocative creative.”

According to Walton, it takes a particular mindset to succeed at the firm. “I would say that part of our DNA is very young, not necessarily in age, but in terms of the spirit of who we are, bringing in fresh, new ideas that drive our business,” he says. “We also put a high [value] on being fast. I think partners look to us because we’re quick and the work is really creative. We put a premium on creativity here.”

Magic Formula?
That creativity has led to numerous successful campaigns, including one for Major League Baseball’s Los Angeles Dodgers. In January 2013, Walton Isaacson became the Dodgers’ advertising agency of record: It coordinates the purchase of media time and space. Last year, the team was facing dwindling ticket and merchandizing sales. New ownership came in and made a lot of changes. “They needed a way to communicate all the things they were doing to bring back the fans,” says Costello. The solution: a campaign titled “A Whole New Blue.”

Lon Rosen, executive vice president and chief marketing officer for the Dodgers, says the campaign reflects the ball club. “There’s a new ownership group, there’s new players, we redid the stadium,” he points out. “So Walton Isaacson came up with a great tagline. It’s really caught on. They did an amazing job.”

The campaign includes slick billboards featuring such players as first baseman Adrian Gonzalez and pitcher Clayton Kershaw. “It’s about redefining what it means to be a Dodgers fan and what the Dodgers mean to L.A.,” says Han. “It talks about the millions of dollars that they’re putting into the stadium and re-signing some superstar players. But it also talks to how they would address parking beyond the stadium, or how they would refresh the food situation at the stadium, the entertainment offerings between innings, and the way they would engage the community.”

The Dodgers sold nearly 10,000 more new season tickets in the 2013 season than in the season prior. “They’re giving us a great deal of credit for that,” says Walton, “so I’m happy about that work. I think it was our entire approach that made that happen.” The team also sold out six of its first nine home games.

There is no magic formula, however, to determine what’s going to work for a client, says Walton. Sometimes the agency looks to deliver what the client needs, even if it’s not what was specifically requested. Each client has different needs and goals.

Transforming Steel into Gold
Another successful campaign featured the Lexus CT 200h. The luxury automaker wanted to appeal to Generation X and Generation Y consumers, so Walton Isaacson crafted a message that targeted them across TV, print, live promotions, digital, and social media. A similar Spanish-language spot was developed that shows the car driven through the streets of a city that looks like Miami, past restaurants and nightclubs with young people taking notice of the vehicle. “For the first time in near-luxury sales, which is the area we look at for Lexus, we have topped Cadillac–an amazing accomplishment for the brand against African American consumers,” says Walton. “We’re proud of the creative we’ve been doing that has connected with that consumer group.

The industry has taken notice of the creative house. In April 2013, Walton Isaacson’s Verizon Holiday Campaign featuring comedian Kevin Hart was named the 2012 Best Technology Online Campaign for the Internet Advertising Competition Awards, which highlight the best online advertising in 96 industries and nine online formats including video, mobile, newsletter, e-mail, and social media. “We don’t just think about coming up with creative for TV. We think about creative that will translate through each of these 360 channels,â€ says Walton. “That doesn’t mean that the client is going to execute across those 360, but we have to think that way. We have to think about a world that is not myopic, about how it consumes information, and look at it much more broadly.

As far as original programming goes, the co-founders plan to follow their success with Verses and Flow by developing more programming in which the firm will have an ownership interest. “We want to create more innovative and unique programs for the Hispanic and LGBT audiences,” says Ayiko Broyard, vice president and group account director for the agency. “Obviously digital is a huge space for us, especially with Twitter, Facebook, and Tumblr. We’re constantly looking at new ways to reach all consumer segments through social media.”

Walton Isaacson’s future will involve identifying new revenue streams that leverage the agency’s branding expertise. “So whether you’re Lexus or a baseball team like the Dodgers, we’re going to figure out a way to be resourceful using our branding expertise,” says Isaacson. “We’re constantly looking at new ways to create revenue streams for the agency and for our partners that typically weren’t available to companies like ours in the past.”

Black Blogger Month: You Heard That New? Of Course You Have