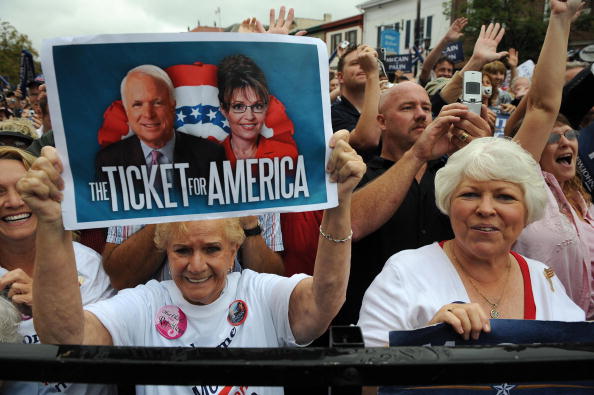 On the trail: McCain-Palin supporters during a campaign event in Lebanon, Ohio, in September. (Source: Getty Images)

The Republican Party is in a state of flux. Many call it an identity crisis; others say the party has lost its way. However the problem is defined, voters across the nation made clear on Election Day that they were having none of it. So, where does the party go from here?

That was the hottest and most hotly debated topic at this week’s Republican Governor’s Association meeting in Miami where attendees sought ways to stage a GOP comeback following its Nov. 4 defeats. Some Republicans, like Florida Gov. Charlie Christ, are calling for the party to grow more moderate so it can expand its demographic base and attract more voters, including those who abandoned them on Nov. 4. And while all eyes were on former vice presidential candidate Gov. Sarah Palin, who remains a superstar in many conservatives’ eyes, questions remain about whether she and other traditionalists are the true representatives of the party and its future.

The party needs a leader.Â  Unfortunately, no one seems quite sure who that person would be. Even before Election Day, the House Republican leadership was undergoing a shakeup and two of its top commanders have already announced they will step down from their leadership roles.

“A lot of people have been doing some soul searching. I was joking about how long the Democrats have been looking for the North Star that Obama provided for them, but I don’t see the equivalent on the Republican side. I can’t say anybody’s going to be a huge, transitory leader like that,â€ says Danielle Doane, a fellow at the conservative Heritage Foundation.

“There’s no natural leader in the party and I can’t see John McCain leading the loyal opposition They’re not that united behind him and the fact that 64% allegedly want Sarah Palin to run for president, that tells you there’s a fighting mood out there, at least among a significant number of social conservatives,â€ adds Bruce Cain, a University of California, Berkeley, political scientist.

There is also an ongoing debate among Republicans about whether they should remain true to their traditional conservative principles and values or find their way more toward the center. Should they change their policies or their message? But according to Alabama Rep. Robert Aderholt, the party’s principles will remain unchanged. “It still stands for the issues we’ve always stood for, that government is best when it governs least, but there’s some messaging that needs to change. We’ve been labeled as mean spirited and not happy as conservatives and I think that’s totally not the case. We need to come out and change our message.â€

Tennessee Rep. Marsha Blackburn, one of the GOP’s rising stars, echoes that sentiment. “Voters want us to stand up and act like conservatives. We don’t need to rebrand ourselves; we need to get back to basics,â€ she says. “People want us to

You Don’t Have to Cancel Christmas, but…