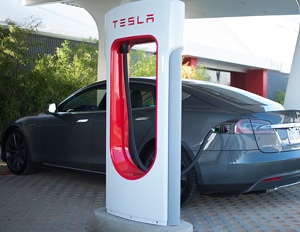 The electric car manufacturer has Supercharger stations throughout the country, enabling coast-to-coast travel.

Tesla’s planned Gigafactory battery plant project just got some help from a friend.

According to Reuters, the electric car company is teaming up with longtime partner Panasonic to construct the Gigafactory, its large-scale United States-based battery manufacturing facility.

The Gigafactory will be owned and operated by Tesla, but will have “… Panasonic joining as the principle partner responsible for lithium-ion battery cells and occupying approximately half of the planned manufacturing space,” according to Panasonic’s press release.

“We have not yet decided exactly how much we will invest and when,” said Chief Financial Officer Hideaki Kawai.

While Tesla hasn’t been around for very long, its partnership with Panasonic has existed for the past four years.

In 2010, two years after the company began mass production of its electric Roadster sports car, it inked a deal with Panasonic that will help supply the car company with lithium-ion batteries for its vehicles. “The Gigafactory represents a fundamental change in the way large scale battery production can be realized,” said Tesla’s Chief Technology Officer JB Straubel about the deal. “Not only does the Gigafactory enable capacity needed for the Model 3 but it sets the path for a dramatic reduction in the cost of energy storage across a broad range of applications.â€

According to Reuters, someone familiar with the issue believes Panasonic plans to invest around $1 billion, with an initial investment of anywhere between $200 and $300 million.

Tesla CEO Elon Musk has high hopes for the planned manufacturing facility, and thinks, when the Gigafactory is fully operational by 2020, it will produce more lithium batteries in one year than were made worldwide in 2013.