Tesla CEO Will Show Off The 'D' October 9 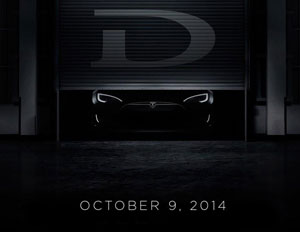 Elon Musk is good at drumming up buzz, especially when it comes to his electric car company, Tesla Motors.

But this viral tweet about his newest electric car has people clamoring for more.

On Wednesday, Elon Musk, CEO of Tesla, sent out this pretty suggestive tweet announcing a potential new product in the Tesla family.

The tweet, evocative of Steve Jobs’ iconic “One more thing” tagline, reads “About time to unveil the D and something else.”

About time to unveil the D and something else pic.twitter.com/qp23yi59i6

The suggestive name aside, the “D” could be one of many concepts Elon Musk has been toying with since Tesla’s creation. Earlier this year, Musk discussed the ‘Model III’ that was meant to fill the void in the company’s lower-cost electric car lineup.

And while the Model S sedan is already available, and the Model X SUV has already been announced, the “D” could be either a smaller sedan or SUV, as stated in his announcement of the “Gen III” cars.

Of course, what that “something else” is could be a completely different product category (motorcycles, anyone?) or an update on Tesla’s Gigafactory set to be constructed in Nevada.

Later on, Elon Musk addressed the wording, and while it was unintentional, was glad it sparked interest in his cryptic announcement.

I love the Internet. Comments had me literally ROFL. No, it wasn’t intentional. Glad I didn’t mention the other letter!