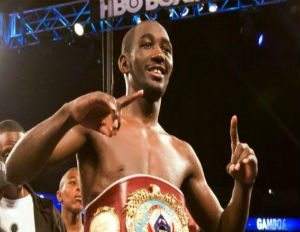 The follow is a feature from The Shadow League‘s J.R. Gamble:

There’s more than football and cornfields in Nebraska. In fact the state has produced an array of products and people that have helped shape American lifestyles on so many levels. Kool-Aid, the Vice Grip, the Hallmark Card, and Malcolm X come from Nebraska.

So does WBO lightweight champion Terence Crawford. The 27-year-old prize fighter is “the Pride of Omahaâ€ and will be making his second title defense in front of his hometown supporters on Saturday Nov. 29th against No. 1 contender and mandatory challenger Raymundo Beltran of Mexico.

The fight pits the speed and boxing prowess of rising star Crawford (24-0, 17 knockouts) against Beltran’s (29-6-1, 17 KOs) forward-marching, punching power. To Crawford’s advantage, the fight will go down in his back yard–the CenturyLink Center in Omaha. It will be televised live on HBO Boxing After Dark.

With Crawford being THE RING’s No. 1-rated lightweight and Beltran, THE RING’s No. 2-rated 135-pounder, their clash will anoint the winner as THE RING champion in his weight class.