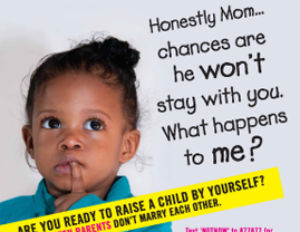 A New York City campaign targeting teen pregnancy has ruffled the feathers of reproductive advocates who say they reinforce stereotypes about young mothers.

One poster depicts a curly-haired baby boy with sad eyes and tears dripping down his face. “I’m twice as likely not to graduate high school because you had me as a teen,” read the text placed next to his head. Another poster of a dark-skinned girl reads, “Honestly Mom…chances are he won’t stay with you. What happens to me?”

Planned Parenthood has expressed its discomfort with the flyers to Mayor Michael Bloomberg’s office. Opponents of the campaign say the images on the posters ignore the racial, economic and social factors that contribute to teenage pregnancy and stigmatizes teenage parents and their children.