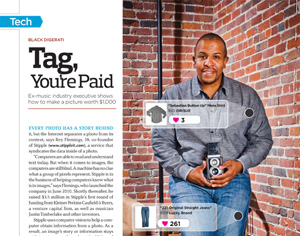 A machine has no clue what a group of pixels represent,â€ said Flemings, in an interview with Black Enterprise earlier last year. “We believe that the internet separates a photo from its story. It loses its context. The minute someone uses that pic again all of the data around that pic is lost. Stipple ensures that story stays with that picture forever.â€

Flemings’ company, Stipple, is in the business of helping computers know what is in the images posted on Facebook, Twitter, blogs, and e-commerce sites. It accurately tags photos at enterprise scale and connects images from third-party sites back to their original owners, enabling real-time distribution of media and commerce through photos.

Publishing partners earn revenue through purchases made via Stippled photos. Now, it has the ability to drive e-commerce directly from within the Facebook News Feed and Twitter timeline. The idea to monetize this technology occurred to Flemings and his cofounder, Michael Dungan, when they realized that the captions you write and names of people you tag in photos are lost once a photo is pulled from one site and reposted to another.

So they set out to build a tool that capitalized on semantic search, computer vision technology, and that generated brand awareness for any company–from the large multinational automobile manufacturer like BMW, all the way down to the local baker who wanted to make sure that photos of his wedding cakes posted on Pinterest led viewers back to his Main street shop.

Flemings, a former record company executive, and Dungan raised $3.5 million in Stipple’s first round of funding from Kleiner Perkins Caufield & Byers, a venture capital firm, as well as musician Justin Timberlake and other investors. Then the co-founders loaded their board with big names like Al Gore and Colin Powell.

So far, Flemings’ “foresightâ€ has paid off. In November 2012, Stipple tagged 12 million images and Flemings predicted that in December the company would tag more than 80 million images. “Stipple is now tagging more images per day than our competitors tag per month,” commented Flemings, in a recent press release. The company’s current image tagging rate is greater than 1 million images per day, with 100% accuracy, he reports. Hundreds of the world’s leading merchants, including Nike, L’Oreal, Zappos, Nordstrom, and more than 5,000 publisher website partners are leveraging Stipple to tag tens of millions of their images per month.