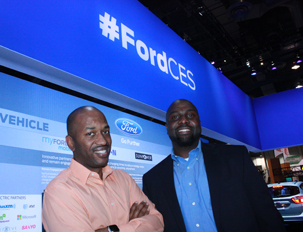 The written word isn’t dead yet. To the contrary, it’s more alive than it’s ever been before thanks to Tirrell Payton and Bruce Hopkins, founders of BT Software and Research. The duo launched Kaliki Audio Newstand, a spoken word platform that allows consumers to access their favorite written content on-demand, anytime — in-car, online and on the go.

Both partners have a technology background, the merging of their skill sets was a match made in auto heaven. While Hopkins worked for three of the top auto manufacturers, Payton was an integral part of Yahoo Media Group and worked as a senior engineer on some of Yahoo’s streaming media properties, including Launchcast Radio and Yahoo Music Jukebox.

Now, with Kaliki, time-crunched drivers who want to read more, but can never find the time, can have a bevy of magazines and local newspapers read to them by live professional narrators. Currently, Kaliki is available in connected vehicles manufactured by Ford Motor Company, but the team is working to add other auto manufacturers. Users can listen to this content when they pair their smartphones to Ford’s Sync AppLink service using a Bluetooth connection. The platform is also available to enjoy online from desktop and laptop computers and on mobile phones.

Kaliki has already begun distributing on-demand content through partnerships with the Los Angeles Times, The Detroit Free Press, TV Guide, Men’s Fitness, Shape, and OK! to name a few, and their Audio Newsstand is free of charge to the one million plus SYNC users, who are currently on the road. Black Enterprise chose Kaliki as Tech Startup of the Week because they used their technology background to bring to life a robust platform with a viable business model.

Read more about Kaliki in the March 2013 issue of Black Enterprise Magazine, where they received our 2013 International CES Best in Show Award for the Smartest Automotive Tech Solution. Watch the video below as Payton, co-founder and CEO of BT Software, discusses how he and Hopkins secured the Ford Motor Company partnership deal.