Tech Startup of the Week: Classana, a Prerequisite for Lifetime Learning 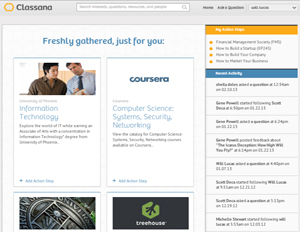 Will Lucas launched Classana to help lifelong learners accomplish their immediate and long term goals in and out of the classroom (Image: Classana)

In 2012, Will Lucas realized that college wasn’t set up for you to ‘pick and choose’ classes, but it was set up for you to follow a prerequisite set of courses toward a degree.
At the time, he was running a tech startup full time, taking 16 classes at the University of Toledo in an effort to finish his degree. His mentor suggested that he start taking classes that speak directly to what he was doing to get gain better skills toward running his business.

“I began looking for classes in iOS development (programming for iPhone and iPad), and at the time my school didn’t have a program for that sort of training. So, I began looking for a class with at least a similar skill-set,â€ says Lucas, 32, who first launched Creadio , a service that streams live, customized radio and television programming along with social media messages in retail stores.

Daunting didn’t even begin to describe the process it took to register for a class that wasn’t in his specific program. That’s when he got the idea for Classana, an online educational resource discovery engine that provides users with recommendations for the next steps in their education, career and interests based on a proprietary matching algorithm and machine learning.

Classana’s resource recommendations are based on a user’s stated interests, past life experiences, goals, behaviors and activities. This makes Classana different from traditional web browsing as it provides users with content from across the world that they may not have even known to search for on a traditional search engine like Google, Yahoo, or Bing.

Classana’s implementation is three-fold. First, Classana partners with leaders in education (colleges and universities) and offers valued content creators (authors, publishers, event coordinators, among others) an opportunity to index their materials and offerings through the platform. Second, as they browse the web, anyone can add content to Classana’s database by clicking an “add to Classanaâ€ button that can be added to web browsers as an add-on. Finally, Lucas’ team has developed a proprietary web “crawlâ€ system that scans the web for resources and inserts them into the Classana index.

After curating these resources, the website then provides users with recommendations to materials, classes and online courses, books, events, organizations and programs, among other resources that will benefit them in their education, career, and entrepreneurial goals.

Classana was accepted as a client in Rocket Ventures, a northwest Ohio-based venture capital firm, and with its help to redevelop Classana’s business plan, the company received $25,000 from The State of Ohio’s Edison Program to begin development. With that initial infusion, they launched in public beta in February 2013. They’re in the process of raising their first round, but so far Lucas has developed partnerships to index resources at The University of Toledo and Pearson University, along with education resource websites like ck12.org, Treehouse, and Codecademy.

This week, Black Enterprise celebrates Classana as Tech Startup of the Week for developing a technology that will make education a life long journey and not a means to an end. Join Lucas and other EduTech Entrepreneurs at “Today’s Business Crisis: Educating Tomorrow’s Workforce,” a symposium hosted by Black Enterprise in partnership with the Bill & Melinda Gates Foundation,Â  to be held May 15, 2013.

Click here for more on tech founder Will Lucas…