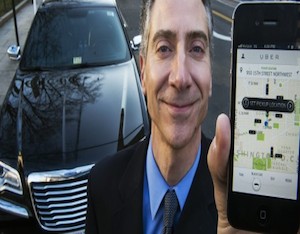 Uber’s biggest competition could come from the U.S. government.

Washington D.C.’s taxi commission is preparing to launch the Universal D.C. TaxiApp for its drivers, to bring parity between the capital’s taxi drivers and its Uber drviers, according to Yahoo News.

The beta testing program is set to begin in March, and could be rolled out to the entire fleet of 7,000 taxis in the Washington DC area by the end of spring. The taxi cooperative will be responsible for maintaining the app.

On-demand car service startups like Uber and Lyft have seen their fair share of controversies in the past year, with Uber being banned in multiple countries around the world, and Lyft forcing drivers to agree to contracts that would adversely affect their income.

An Uber executive was recently embroiled in a controversy after suggesting the company fund a task force aimed at finding information to use against journalists who are unfavorable to the company.

The service won’t shut down companies like Uber, but rather compete with them, putting taxi drivers on equal footing with their modern-day counterparts.

Exploring The Life and Legacy of Nelson Mandela in South Africa