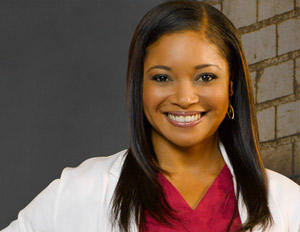 Despite having over 10 major motion pictures and prime time television shows–including ABC’s Castle–under belt, Tamala Jones is quick to point out that it’s not always about money but what one does with their income that matters most. Hearing about her grandmother’s feat of raising over 100 foster children through the years has inspired the accomplished actress to follow in her noble footsteps.

Jones regularly donates to Rosemary Children’s Services, a California foster home that first opened its doors in April of 1920. Hoping to adopt children in need one day, the Hollywood starlet talks with BlackEnterprise.com about her passions and making the move from in front of the camera to behind it.

What’s your relationship with Rosemary Children’s Services and how did you get involved with them?

I raise money for [Rosemary Children’s Services], and that money basically helps them to continue with after school activities for their foster kids. My grandmother has been a foster parent since before I was born, and she has raised over a hundred children, I’m sure of it. They all come back to visit her, especially around Thanksgiving and Christmas. She’s given her whole life to children–she loves children. She has her own, and almost died giving birth to my mother, who was her last child, but she’s still a foster parent to this day, so she’s my influence. [My grandmother’s] the one who brought me to Rosemary’s Children’s Foundation and I do it for her; I do it for the kids. [I want] to take over where she’s going to leave off.

Since you’ve found yourself so involved within the foster care system, do you see yourself adopting any children in the future?

I first need to have one of my own. I need to pop one out and get my practice in with that boy or girl–I’ll be happy to have either. From there, I will know the patience and the love that you have to put into raising a child; and then I can give to a child less fortunate. I wouldn’t want to take a child out of the adoption system with me not knowing what the heck I’m doing. So I’ll have my practice with my own baby and [then] I want to adopt a little Guatemalan baby.

Why a child from an international country as opposed to a child here in the States?

I watch documentaries where there’re [foreign] children living next to the garbage dump, and they’re trying to go through and find what they can eat; what they can dig up to sell. I know we have kids here that need homes, and I would love to give them a home too, but my first [adopted] child, I would love to get them from Guatemala because their situation is a little rougher than ours here in the States.

Fans of your work get to see you weekly on ABC’s Castle. What other projects do you have on the horizon?

You know I’m half Jamaican and I love to have about 10 jobs going on, but Castle is pretty much it. In my hiatuses I try to find independent projects. [During] my last hiatus I shot Things Never Said with Shanola Hampton and Omari Hardwick. [The director] Charles Murray, who was a writer and producer on Castle, wrote and directed it. [And] I’ve been sprung on Whoopi Goldberg’s one-woman show, Fontaine: [Why Am I Straight] since the first time I ever saw it when I was a kid, so I want to do that. I want to put together the story of my life and figure out a funny way to tell it and perform it. I’m also writing a script for a television show. It’s a little difficult when you’ve been on the other side of the cameras all your life, but I love a good challenge.

With all that you have going on and overcoming a near fatal aneurysm, it’s clear that you’re a strong, Black woman. What do you think defines you a woman of power?

I’ve always worked hard for every cent. I have always given back whether it be through a charity or my family. Whoever needs anything I’m there. I wear my heart on my sleeve. I will literally give you the shirt off my back, and I think that when you are kind and your goals keep getting bigger, that makes you a person of power. You want the best for yourself, |and you look to improve life situations for every one. I think that gains you power. It’s not about money all the time, it’s about what you can do with the money that you make.

Are you a Woman of Power? Then Join us for the annual Black Enterprise Women of Power Summit hosted by State Farm, Feb. 15—18, 2012, at The Ritz-Carlton, Orlando, FL. This exciting, executive leadership summit is your chance to focus on YOU. Network with industry leaders, learn career strategies, find work-life balance, and start creating–and living–the life you really want! Register now and use code DGED12 to receive a $200 discount off the price of registration! (Cannot be combined with other offers).

8 Days of Action: Finding Your Purpose and Getting Your Dream Job