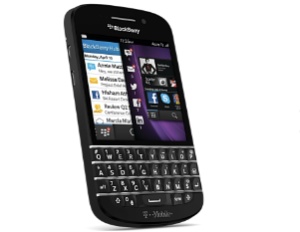 The Canadian smartphone maker has been hemorrhaging both money and people in the past few years thanks to Apple and Google.

By the end of April, it’ll be a little harder to find BlackBerry’s phones on a certain carrier’s shelf.

BlackBerry and T-Mobile are severing their licensing contract that allows the U.S. carrier to carry the business-centric devices.

With the current licensing agreement set to expire April 25, it also leaves the struggling Canadian smartphone maker one less carrier on which to sell its phones.

This refusal to extend the contract seemingly stems from a T-Mobile promotion that knocked BlackBerry in February. BlackBerry’s newly appointed CEO John Chen took offense at T-Mobile’s promotional plan for Apple’s iPhone 5s that stated the promotion was “a great offer for BlackBerry customers.”

Chen went on the defensive. “As we were never told of their plans in advance,” he said, “I can only guess that T-Mobile thought its ‘great offer for BlackBerry customers’ would be well received. T-Mobile could not have been more wrong.”

At the same time he thanked current T-Mobile BlackBerry users for their loyalty. “To the BlackBerry user community, I want to extend our deepest gratitude,” Chen said. “Yâ€Žour passion motivates us every day as we navigate our turnaround.”

BlackBerry’s statement Tuesday said the company was “working closely with other carrier partners to provide consumers and business users with alternatives should they decide to transition to another carrier and remain with BlackBerry for their long-term device and service needs.”

Coworker Beef: How to Manage Office Drama Without Losing Your Job