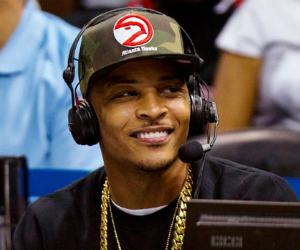 T.I. has been a busy man since he finally put his legal woes behind him. The rapper and family man has dropped a few albums, scored big with a family-themed reality show and has been asked to shill products for various companies. Now, he’s on the market for a new place to call his musical home.

The hip-hop star ended his time at Atlantic only a month ago, but is now being courted by some of the biggest names in rap. All he’s asking for is $75 million. For that, the Georgia native will produce three albums, retain 10 to 20 percent of the all publishing rights, touring, merchandising, film and TV rights, have rights to corporate endorsement deals and retain exclusive signing rights to all Grand Hustle artists.

According to reports, Dr. Dre has already thrown his chips in and asked T.I. to join Interscope. Jay-Z has made it known that T.I. would be a better fit with the RocNation family. No specifics have been reached from either party. Sony’s made an offer for $50 million and Universal is expected to join the bidding war some time next week.

Not bad for the self proclaimed King. Head over to TMZ for more on T.I.’s potential big deal.

Got No Experience? You Can Still Make Major Career Strides

The Jabari Graham Story: From Being Laid Off by Universoul Circus to Art World Success