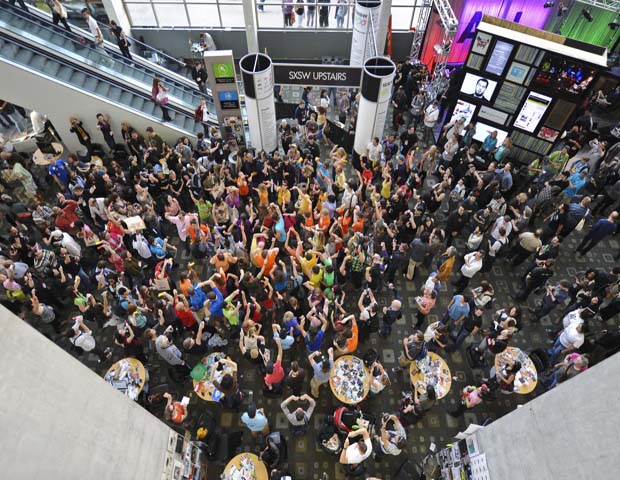 The 2012 South by Southwest (SXSW) Conference and Festival, widely-known as a hub where ground-breaking technology, music, and independent film intersect, has come to a close. Both SXSW newbies and seasoned festival attendees descended upon Austin, Texas last week to get their interactive and multimedia fix, soaking up the latest trends and getting a sneak peek at some of the newest tech, music and film offerings. Staying true to our editorial mission to showcase entrepreneurs and technology experts of color, BlackEnterprise.com presents Faces of SXSW, a photo gallery highlighting tech enthusiasts and innovators who attended the annual gathering. Techies, entrepreneurs, influencers, and social media moguls are all heading down to Austin, Texas this weekend for the 2013 edition of South by Southwest (SXSW). The annual event brings together some of the brightest minds in technology, social media, and entertainment.

While there are tons of panel discussions and meetups taking place throughout the course of the interactive festival, many African Americans will gather for BiT House, Blacks in Technology’s house at SXSW, located at the Hilton Garden Inn in downtown Austin. The gathering was developed to showcase the collective impact of the African Diaspora within the technology and innovation space.

The weekend festivities will kick off with a welcome reception taking place at Austin’s historic George Washington Carver Museum, located downtown in the cultural epicenter of Austin’s African-American community, on Friday, March 8. Attendees will gather for live music and complimentary bites and beverages. Recognizing leaders who have made an impact in technology-related industries, the evening will commence with BiT presenting the Top 10 Black Innovators of 2012 awards.

Throughout the weekend, attendees will participate in interactive sessions and, most importantly, network. SXSW has even fostered creative minds to found startups. Take Hajj Flemings, for example, the tech entrepreneur created and officially launched Gokit–a digital storytelling platform, which allows users to share their experiences via multiple profiles for family, work, and friends–at the highly-anticipated conference.

From thought-provoking panels such as “#Scandal: How Television’s Hottest Show is Fueled by Social Media,” featuring social media rock stars like Kimberly C. Ellis, Ph.D., who’s widely-known as Dr. Goddess, and Luvvie Ajayi of AwesomelyLuvvie.com, to a hackathon hosted by tech startup blerdology, SXSW 2013 is one you won’t want to miss.

There will also be numerous high-profile guests in attendance such as Newark Mayor Cory Booker, who is in a self-titled session called “Cory Booker: The New Media Politician,â€ and Shaquille O’Neal, the first celebrity to get verified by Twitter, who will be interviewed by best-selling author Brian Solis. For a complete listing of all SXSW events, visit the SXSW website or follow the official accounts on social media.

On Saturday, March 9, the Capital City African American Chamber of Commerce is hosting a party to recognize the innovators profiled in Black Enterprise’s March 2013 issue. From 12:30-3pm, attendees will be able to toy with new new gadgets, mix and mingle, and enjoy music provided by DJ Hella Yella. If you can’t make the event, follow @capcitychamber and #SXSWBlackCreatives on Twitter. You can see live interviews taking place by tuning into +CCAACC on Google+.

From March 8-12, follow Black Enterprise as we bring you all the action live from Austin. For up-to-the-minute coverage, check the BlackEnterprise.com technology channel, and follow along on Twitter via our official hashtag, #BESXSW. Also, follow our on-site correspondents–Marcia Wade Talbert, @newsgyrl, tech editor for Black Enterprise Magazine; Michael Street, @MrMikeStreet, organizing chair of Blacks in Tech, NY, and Mary Pryor, @laydeefly, online media specialist and social media enthusiast–as they dish on the latest tech news at SXSW.

Will you be at SXSW? Let us know which panels you’ll be attending in the comments section below.

Chris Brown Blows Up on Valet Over Ten Dollars