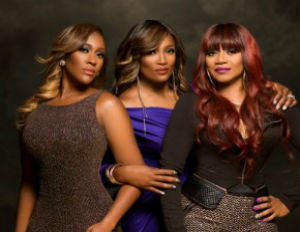 We first fell in love with the ladies of SWV in 1992 when they released their debut album, It’s About Time, which featured hit songs “Weakâ€ and “I’m So Into You.â€ It’s nearly 25 years later and the “Sisters With Voicesâ€ have proven once again, they still got it–a soulful and unmatched R&B sound capable of topping the Billboard charts. Beyond using music to capture the hearts and souls of fans from around the world, the dynamic trio featuring Leanne “Leleeâ€ Lyons, Tamara “Taj” Johnson-George and Cheryl “Cokoâ€ Clemons, are mothers, wives, and “glam-mas.” On the heels of their latest album–Still,Â BlackEnterprise.com caught up with the ladies to talk about their new music and career longevity.

BlackEnterprise.com: Let’s revisit the past for a moment, specifically around the time when you released the first album–It’s About the Time. What advice would you give to your younger selves about the music industry?

Taj: That it [music] is a business. You can really get confused, get your feelings hurt and be damaged by this industry. When we first started in the industry, we saw celebrities dressed up on the red carpet, and we were ready to just have fun. It’s easy to lose sight of what’s really important. At the end of the day, it’s a business; you have to focus, know your stuff, practice, and be committed.

What’s the biggest challenge you’ve faced?
Coko: Not really having anyone to guide you. Not having the proper people around us. Management has been crazy. Now I’m 45 years old, and I’m just learning things I should have known back then.

When it comes to music, everything has changed in terms of the way it’s produced and distributed. How have you remained true to who you are as R&B artists?
Lelee: We know our fans. We know what got us this far. We know what they want to hear from us. So, we’re always going to stay true to them and take care of what our fans want first. If we want to do a little something different, we’ll throw a few fun songs on the album. If you try to adapt your music to what’s going on now, your fans will be the first to ask or tell you “What are you doing? Stick to what you do best.â€ You can be a dope singer, but all it takes is one song–to throw you off.