Support Makes All the Difference 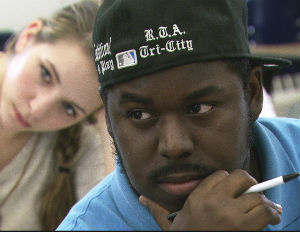 The powerful documentary All the Difference, which aired last night on PBS, tells the story of how two young African American men beat the odds; it also reveals the power of supportive mentors, teachers, and family members.

The Odds Against Them

Both Robert Henderson and Krishaun Branch grew up on the South Side of Chicago, an area notoriousÂ for its poverty and violence. Both were personally touched by violent crime: Robert’s father killed his mother when Robert was 17 months old; Branch had been involved with gangs, as had some of his family members.

But both Henderson and Branch would also be the first in their families to graduate not just from high school but from college. They were students at the nationally renowned Urban Prep Charter Academy for Young Men.

High school and college graduation are more like rites of passage for many Americans. In many communities it is assumed that young people will graduate from college, furthermore high school. But for Henderson and Branch, their graduations could signalÂ the end of poverty and instability for their families’ next generation.

Although both young men experienced problems unique to those who grew up in poverty, other difficultiesÂ were the same asÂ those of many college students, like struggling with time management or learning how to ask for help.

Henderson noted that just traveling to and from Urban Prep was harrowing. “I constantly worried about whether I was going to make it home or not,â€ he wrote in an e-mail.

But in college, learning to ask for help was a hurdle. “I eventually learned that asking for help was something I had to do in order to succeed in school.â€ But in the end, what made the difference for these two young men? Both say unequivocally: their support system.

Henderson says, “My grandma, my friends, my pastor, and the Englewood community. I didn’t want to let them–and myself–down.â€

For Branch, it was a group of friends at the historically black school he attended. “While most of us had different majors, we had some core classes together. We … kept each other on track. At the same time, we had friendly competition to keep ourselves motivated.â€

All the Difference is available for viewing online until Oct. 13.

7 Things You Really Shouldnâ€™t Worry About

How Hip-Hop Can Engage Black Kids in STEM Education