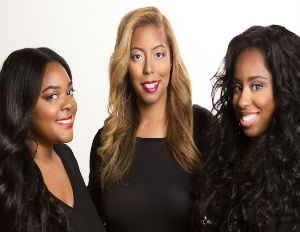 The digital sphere and social media have officially taken over the world and there’s no getting around it. But you don’t necessarily have to, as embracing the new age could be a good thing, opening doors that were previously bolted shut. Take Style Influencers Group for example. What began as an organic friendship between three smart and fabulous bloggers is now a business, advancing opportunities for fellow bloggers, influencers and major brands. Jessica Andrews (GlamazonsBlog.com), Christina Brown (LoveBrownSugar.com) and Lexi Felder (LexiWithTheCurls.com) are the beauties behind SIG. Together they are expanding their own entrepreneurial endeavors, and those of other influencers who may have experienced difficulty navigating through the tricky and extremely exclusive world of media.Â With a go-getter spirit and solid connections, the trio has been able to fosterÂ partnerships with titans like Ford, ebay andÂ Unilever.Â BlackEnterprise.com talked with the three businesswomen to learn more about SIG and working together as friends.

So tell us exactly what Style Influencers Group is.

Jessica: Style Influencers Group is a collective that we started to connect multicultural influencers with brands. It’s really the first of its kind because we don’t only work with bloggers, but we work with digital influencers who might have a platform like Instagram. We just ask that they cater to a multicultural audience. We actually started the company in 2013 with our first NOLA Crawl and we’ve grown from there. Our main mission is to connect the leading influencers with brands that actually value our market and value our audience.

Would you say SIG is an agency? What would you call the company?

Christina: We consider ourselves a network, or collective. We’re a group of bloggers who together are approaching different brands. It’s less of an agency because we don’t declare we’re representing these influencers and their brands. Long-term what we want to get out of Style Influencers Group is not that just we’re allowing these influencers to get paid opportunities through sponsors, but also that we foster a since of community and help build each other up. We have a lot of different opportunities in the pipeline.

It’s really a great idea, and aÂ smart one in such a digital and social age. What inspired it?

Christina: We actually had started working together as a group, going on trips together, being at events together—just as friends and fellow bloggers. We didn’t actually decide to start working together as a business until around 2013. We noticed that we were much stronger in numbers, doing things as a group. Our readers would see that we were all really good friends and that we worked together really well. We also loved a lot of the same brands. We realized that this is something we can bring to other bloggers and to other influencers who are in our same boat, who want to work with brands and a lot of times may not have the opportunity with the other networks that they’re a part of. There are small slots for some of the larger campaigns at other networks for influencers of color. We wanted to be able to bridge that gap.

When you say “bridge that gap,” what does that look like?

Lexi: We’re the liaison. So, if we have a brand that says, “Hey, we need five bloggers to talk about our product,â€ then we can present them with the bloggers that we have great relationships with. We’re working for the blogger and the brand, that way we can connect them. It can be brand ambassadorships, sponsored posts, hosting opportunities, social media posts, sponsored videos. The opportunities are limitless.

What does SIG have in the works that people can look forward to?

Lexi: Our Third Annual NOLA Crawl in New Orleans. We’re continuing that campaign because it does really well and all of our readers are there. We also have a couple of big trips coming on. We have the Kenya Crawl coming up and we’re really excited about that because that’s our first time to Africa. We have everything on our website.

Before closing out, tell us some of the greatest benefits of working together.

Christina: The biggest benefit for us has been overall growth and strengthening our relationships. When it comes to business, yes, you have to work very hard. But it’s all built on relationships, the impressions that you have on other people. It’s not easy, especially if you’re trying to make a living off of being an influencer.

Jessica: We’re really passionate about entrepreneurship in the multicultural community. All three of us had style blogs before we came together, so we know how hard it is to build a business on your own and just how much you need a support system. It’s definitely giving a voice and a platform to influencers who could be passed over in other networks because they’re not as mainstream. At the end of the day we’re all about strengthening the whole as opposed to the parts.

Keep up with all things Style Influencers Group here on their website. Also, check out there We Are Black History campaign that went viral. @StyleInfluencer

How to Preserve Wealth Through Good Health