Stop Majoring in Psychology! Yes, You 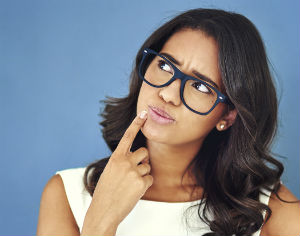 This morning, I encountered a lovely young woman–a college graduate who is considering graduate school, but doesn’t know what to pursue.

“I just may major in psychology again,â€ she told me.

I was aghast. With so many options out there, why choose one of the lowest paying majors? I was particularly distressed by her nonchalance–because she works at Black Enterprise!

According to the New America Foundation, in 2012, the average graduate borrowed $57,000 for a graduate degree. Graduate students can borrow up to the cost of attendance–but that doesn’t mean they should. Not all graduate degrees are worth the cost in time, money, or effort.

Choosing what to study in grad school and even whether to go at all is a decision to make after you’ve considered several factors:

Notice that I never mentioned passion–but we’ll get to that in a bit.

Let’s look at these items one at a time:

If you or your family is independently wealthy, this section isn’t for you. But if cost is an issue, read on.

You can borrow for grad school, but you eventually have to pay that money back. It won’t be worth it if the graduate degree you earn doesn’t bump up your salary much, or doesn’t open the door to more secure employment.

Not all graduate–or undergraduate–degrees yield the same benefits. If you’re not sure what you’d like to pursue, at least explore the highest paying, most secure areas that promise future growth. You can find out what those are at the Occupational Outlook Handbook of the Bureau of Labor Statistics. Or Google high-paying careers–but be sure to peruse only reputable sites like Forbes and Black Enterprise.

Where do you see yourself in five years? In 10? Maybe everyone you know is a teacher, so teaching seems like a natural area to pursue. To broaden your sense of possibility, check books out of the library about various professions–and don’t be embarrassed to be seen in the children’s or young adult sections. Children’s books tend to be simpler and easier to understand.

Also, contact your former school’s Career Services office and ask for their advice. If you’re employed, ask the people in your office how they got to where they are, and if they like what they’re doing. Think about the things that interested you when you were a child–sometimes those early interests provide clues to what we’re meant to pursue as adults.

Is your spouse supportive? Are you an avid volunteer? Do you have children? Aging parents? A mortgage? Other responsibilities that might impinge on your pursuing a graduate degree right now?

It helps to look at your whole life–not just what you want to do–and make sure that your choices make sense in light of the rest of your life. That doesn’t mean you can’t go to school, but it does mean you’ll need to develop a reliable and trustworthy support system to make it happen.

There are lots of options besides grad school. And, despite the title of this post, don’t despair if you majored in psych. According to theÂ U.C. San Diego Extension Emerging Careers report, liberal arts majors are in great demand–they just need to layer tech skills over their liberal arts base. Coding boot camps–the three- to six-month programs that prepare their students for high-paying entry-level tech jobs–are popular and affordable compared with grad school.

There’s also Koru, an immersive career preparation program–a kind of career finishing school–to get college grads up and running for the workplace.

Earlier this year, I was privileged to interview Carmita Vaughan, Founder and President of the Surge Institute. Vaughan grew up in poverty. When she went away to college, she called her mother to tell her she had decided to do social work. She wanted to help others who had experienced poverty.

But her mother, whom Vaughan describes as a “badass,â€ wasn’t having it. “The best thing you can do to help other poor people is to make sure you’re not one of them.â€ Vaughan earned degrees in chemical engineering and business, and for many years worked for Fortune 500 companies.

In Diverse Issues in Higher Education, Anthony Carnevale, Director of the Georgetown Center on Education and the Workforce, stresses that choosing majors in “well-paying, growing fieldsâ€ is especially critical for African Americans–a group that “historically has been deprived of opportunities and had fewer economic assets and resources.â€ The Georgetown Center released a report this spring that revealed that black students are overrepresented in undergraduate majors that lead to low-paying careers.

You live in the United States, and in the U.S. money is important. Don’t choose graduate school–or an undergraduate major–without considering the long economic shadow that choice can cast.

Robin White Goode is the education editor at Black Enterprise. You can follow her on Twitter @RobinWhiteGoode.

Meet the Woman Behind the Democratic National Convention