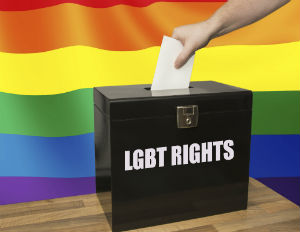 President Obama recently designated the Stonewall Inn in New York City as a national monument, making it the first to be dedicated to telling the story of the lesbian, gay, bisexual, and transgender (LGBT) community’s struggle for equal rights. It is the site of the historical 1969 Stonewall riots often referred to as the trigger for the LGBT liberation movement, including the tradition of LGBT Pride marches.

As iconic as Stonewall has been to the LGBT liberation struggle that blossomed in the 1970s, it also has become a symbol of a largely white, male movement that relegated drag queens and transgender women of color to its margins. Even the 2015 feature film Stonewall was blasted for portraying a whitewashing of history.

Back in the 1960s, the Stonewall Inn was the one of the few bars in Manhattan where people of the same sex could dance with each other. At the time, being gay, lesbian, bisexual, or transgender was considered obscene, illegal–even a mental illness.Â On June 28, 1969, as a turbulent decade was winding down, police raided the Stonewall Inn and started arresting patrons.Â Raids like these were nothing new;Â but that night the patrons had had enough. So they stood up, spoke out, and refused to be silenced.Â The riots became protests; the protests became a movement.

But the often-forgotten people who made an impact that night were transgender women of color: Marsha P. Johnson and Sylvia Rivera. Johnson, African American, wentÂ to Stonewall that night to celebrate her 25th birthday, becoming part of the initial moment of resistance to spark the landmark rebellion, according to the documentaryÂ Pay It No Mind: The Life and Times of Marsha P. Johnson.Â Rivera was a 17-year-old Puerto Rican drag queen on the night of the riot who is reportedly cited as one of the first bystanders to throw a bottle at the police.

After Stonewall, Rivera and Johnson co-founded the Street Transvestite Action Revolutionaries, a group that worked with homeless drag queens and transgender women of color. Rivera became an outspoken activist who rallied against racism, sexual violence, and transphobia (after she began identifying as a woman). An active member of the Metropolitan Community Church of New York, Rivera ministered through the Church’s food pantry. MCC’s youth shelter is called Sylvia’s Place in honor of her advocacy for LGBT youth. Also named in her honor is the Sylvia Rivera Law Project. Johnson died tragically and mysteriously at the age of 48 in 1992 and Rivera died at the age of 50 in 2002 due to health complications.

I had the pleasure of meeting a fiery no holds barred Rivera in 2000 during the filming of a documentary. She was adamant about how the “gayâ€ liberation movement had marginalized and silenced transgender people who had become the “sacrificial lambâ€ in the pursuit of white gay and lesbian equal rights in America.

Still Work to Do

In his address, President Obama spoke of the importance of preserving and sharing Stonewall’s significance in American history. The president acknowledged that despite progress over the years, the LGBT community still faces discrimination. “Today, all Americans are protected by a hate crimes law that includes sexual orientation and gender identity. “Don’t Ask, Don’t Tellâ€ is history.Â Insurance companies can no longer turn you away because of who you are. Transgender Americans are more visible than ever, helping to make our nation more inclusive and welcoming for all.Â One year ago, we lit the White House in every color because in every state in America, you’re now free to marry the person you love,â€ he said.

“There’s still work to do.Â As we saw two weeks ago in Orlando, the LGBT community still faces real discrimination, real violence, real hate.Â So we can’t rest.Â We’ve got to keep pushing for equality, acceptance, and tolerance.â€

3 Reasons Your Boss Should Want You to Work From Home