Atlanta College Students 'Step' Up Their Game with 'Steps by Stephens' 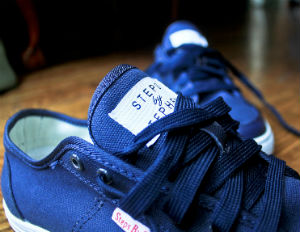 As a student at the prominent Henry W. Grady High School in Atlanta, Thabiti Stephens had some friends who came to class in fancy cars while for others, school lunch was the day’s only real meal. That wealth inequality bothered Stephens at a young age and stuck with him once he entered Morehouse College, where he is currently majoring in business marketing.

“I knew that I wanted to start a company that focused on giving back,” Stephens recalls.

Today, the college junior is the CEO of Steps by Stephens L.L.C. (stepsbystephens.com), an affordable shoe company that produces unisex leather and canvas shoes.

“We design, manufacture, and retail our shoes–the whole nine yards. We oversee every step,â€ Stephens says.

Stephens first came up with the idea in 2010, a week after high school ended. He spent much of that summer mapping out the business, designing the shoes, and researching manufacturing options. Stephens incorporated the business in late 2011 and began selling shoes six months later. He came up with $25,000 in startup funding, which was gleaned from his own savings and that of his new business partner and college roommate, Malcolm Conner, 20. They used the startup capital to produce, market, and distribute their footwear, carrying an initial inventory of 2,500 shoes.

Stephens, 20, is quick to point out his entrepreneurial mission was fraught with challenges. Finding a footwear manufacturer that was willing to work with an untested startup was the first obstacle.

“There aren’t many manufacturers in the U.S. and those that are here were priced substantially higher than those overseas,â€ says Stephens, who interviewed about 200 companies before deciding on his current producer. To find that manufacturer, Stephens turned to Alibaba.com, an outsourcing site that connects businesspeople with manufacturers across various industries.

Pricing was another challenge for Stephens, who had to strike a balance between affordability, profitability, and philanthropy. He studied price points and the footwear industry as a whole–in which brands such as Nike, Adidas, and Under Armour generate $48 billion in annual revenues–to come up with his shoes’ $60 price tag, including shipping and handling.

Most of Steps by Stephens’ sales have been transacted online and involved customers such as Julian McMillan, a fellow Morehouse College student, who took an interest in the shoes when he saw Stephens sketching out prototypes for them back in 2011.

Collaborating with local HBCUs and other colleges and universities, Steps by Stephens will participate in a number of events and activities, potentially reaching an audience of 10,000 students, to help further expose the brand.

“We are working with a few record labels in Atlanta that have agreed to incorporate Steps by Stephens into their artists’ wardrobes,â€ says Stephens. Also, “we have received support from local news and radio stations.”

Living on very little sleep, Conner and Stephens admit that they will have to add to their stable of human resources to achieve the firm’s sales and philanthropic goals. There are times, for example, when they conduct business calls with the firm’s overseas manufacturer at 3 a.m., and then have to wake up for class three and a half hours later.

Last year, Steps by Stephens broke even. Both Stephens and Conner predict sales to surpass $100,000 for 2013. As Steps by Stephens works through growing pains, the firm will continue to roll out new options such as a children’s line and a wider selection of colors.

“We’re also working to get our products into local boutiques and other retail outlets,â€ says Stephens, “all in the name of expanding brand awareness and growing sales that will equate to more food donations and charitable contributions.”

US Manufacturing Industry Making a Comeback